The number of refugees resettled in 2019 did increase modestly by 14 per cent when compared to the previous year, when 55,680 people were resettled, but the agency maintains that “a tremendous gap remains between resettlement needs and the places made available”.

“Resettlement is not a solution for all the world’s refugees, but it is a life saving measure to ensure the protection of those most at risk and whose lives often depend on it”, said Grainne O’Hara, UNHCR’s Director of International Protection.

The largest number of UNHCR-facilitated resettlement departures last year were to the United States, followed by Canada, the United Kingdom, Sweden and Germany.

Out of the more than 63,000 refugees resettled last year, the largest number originated from Syria, the Democratic Republic of the Congo, and Myanmar. 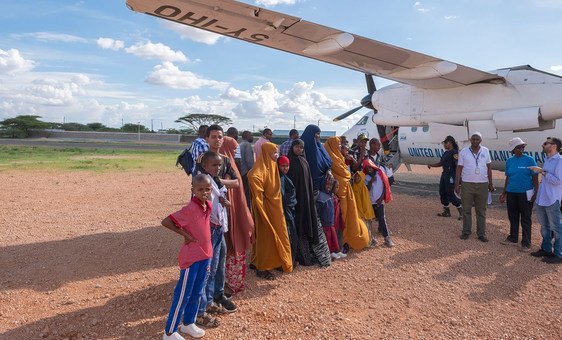 Increasing refugee resettlement opportunities and other complementary pathways for admission, including through family reunification, work and study routes, is one of the key objectives of the Global Compact on Refugees, said UNHCR, representing “a tangible way for states to share responsibility and show solidarity with host countries supporting large refugee populations.”

Last year the agency launched a Three-Year Strategy on Resettlement and Complementary Pathways, along with governments, non- governmental organizations, and civil society groups, in an effort to increase the number of resettlement places and admissions, as well as expanding the number of countries offering these programs.

While the Strategy’s target of 60,000 resettlement departures to 29 different States last year was achieved, UNHCR said it was worried that based on current projections, fewer refugees will be resettled this year. This year, the goal is for 31 countries to resettle up to 70,000 refugees referred by UNHCR.

Among UNHCR’s priorities are to increase the number of resettlement places and the pool of countries admitting refugees, as well as safeguarding the integrity of the resettlement programme.

UNHCR and UN migration agency, IOM, have launched a joint initiative, the Sustainable Resettlement and Complementary Pathways Initiative (CRISP), to implement activities required to reach resettlement and complementary pathway objectives and are appealing to States to provide the necessary financial support of USD 19.9 million.

More information on UNHCR’s resettlement data for 2019 is available here and UNHCR’s Global Resettlement Data Portal, with statistics going back to 2003, can be accessed here.