“Even as the conflict parties all profess to me their desire for peace, their focus remains on military options…[which] will not result in sustainable solutions”, he said.

Grundberg to #UNSC:"The process should be designed to allow for parallel progress on different agenda items of importance to Yemenis. It'll address the parties’ priorities in the context of a broader agenda that represents diverse Yemeni interests."

Mr. Grundberg expressed alarm over an increased use of artillery, missiles and airstrikes – putting people, infrastructure and services at greater risk.

Pointing to the summary execution of ten local security force members, he reminded that wars should still be subject to rules of engagement.

Mr. Grundberg said that during his first three months on the job, he has been engaging with Yemenis on “how to reverse the current escalatory trajectory and start a political process”, and establishing “close and trustworthy relations” with States in the region, to move peace talks forward.

“As the conflict intensifies…I am convinced of the need for a comprehensive approach”, said the Special Envoy.

Pointing out that piecemeal solutions can only provide temporary relief, the UN envoy stressed the need to address immediate needs and priorities towards “a comprehensive political settlement”.

“We need to work toward a just and sustainable peace, and not merely the absence of war”, Mr. Grundberg spelled out, which requires coordinated international and regional support, to construct a “Yemeni owned and internationally-supported political process” that will result in broader stability.

“The support of this Council will be critical”, said the UN envoy.

The process should de-escalate violence, prevent further economic deterioration and mitigate the impact of the conflict on civilians while building consensus on a political settlement to sustainably end the war, establish inclusive governance, and ensure Yemenis’ civil, political, economic and cultural rights. 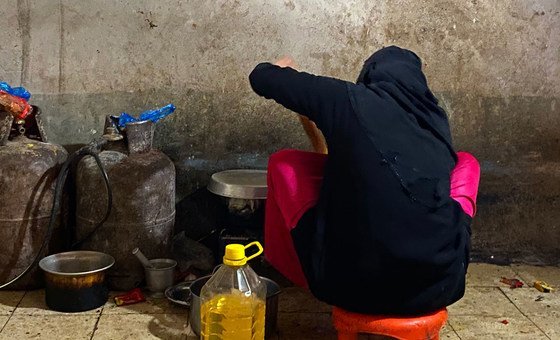 The UN official said that engagement has already begun and will be intensified.

While intensified fighting was a challenge, he underscored that it should not be allowed to stop the process, saying, “in fact it makes the work we are doing all the more essential”.

“Warring parties can, and should, talk, even if they are not ready to put down their arms” said Mr. Grundberg, urging open communication channels “without preconditions and as a matter of priority”.

He called for the Council’s support to “establish an inclusive, comprehensive process for bringing this conflict, finally, to a just and sustainable end”.

He recounted that intensified fighting and shifting frontlines have forced civilians to flee – some for a second or even third time.

In Marib, offenses by Houthi forces, formally known as Ansar Allah, have displaced more than 45,000 people since September and last Thursday, missiles struck a camp for internally displaced persons (IDPs).

Moreover, intensified fighting in southern Hudaydah and Taizz has displaced over 25,000 people, increasing civilian casualties, including five deaths during an airstrike on 3 December.

In parallel, hostilities have continued along nearly 50 front lines across the country, with renewed shelling in Sana’a and heavy clashes in Sa’ada that have resulted in civilian casualties and damaged infrastructure

“All parties must uphold their obligations under international humanitarian law…including obligations to protect civilians and civilian infrastructure and to facilitate impartial humanitarian relief”, underscored Mr. Rajasingham.

IOM
A displaced family in Marib, Yemen, carries a winter aid package back to their shelter.

The UN official also expressed disappointment that two UN staff members whom Ansar Allah arrested last month in Sana’a remain in detention, despite leadership assurances that they would be quickly released.

“To date, we have had no access to the detained staff and have received no official information regarding their arrest”, he said. “We are likewise deeply concerned by the arrest several weeks ago of a United Nations contractor in Marib”.

“We call for immediate access to the staff and for official information to be shared regarding the arrests”, Mr. Rajasingham said.

The deputy relief chief said that the biggest challenge for Yemen’s aid operations was the “freefall” state of the economy, which is pushing millions into dependence on humanitarian assistance.

“But humanitarian aid is not the way to solve these problems”, he stressed, advocating instead for the UN’s economic framework to boost purchasing power, reduce the cost of imported goods, and improve macro-economic stability.

Requiring a mix of financial and political investments, political commitments, and lifting restrictions on commercial imports, the framework would help lower commodity prices.

“Import revenue could then be used to pay civil servant salaries”, said Mr. Rajasingham. “As the economy improves, humanitarian needs will start to reduce. Eventually, the size of the aid operation could start to reduce as well”.

He reminded that Yemen still requires “a massive humanitarian response” at least through next year, saying, “we aren’t there yet”.

Calling on everyone to “do more to help Yemen put an end to this crisis for good”, he pushed for implementing the UN economic framework in parallel with the humanitarian response while moving towards a political solution as quickly as possible.

“Peace is the only sustainable solution in Yemen, and to achieve peace, everyone must be willing to talk”, concluded the UN official.