Almost all international support came to a halt, and it seemed certain that for health workers in lifesaving facilities throughout the crisis-wracked nation, and the millions they serve, things would only get worse.

But then, as one midwife* recalled, in testimony exclusively supplied to UN News, the support started coming, thanks to a groundbreaking new agreement led by the UN’s development agency.

In the past few weeks, the UN Development Programme (UNDP), under an agreement with the Global Fund, has quietly extended a lifeline to Afghanistan’s health system and all the families that depend on it, providing $15 million to avoid the collapse of the entire sector.

Over the past few weeks @UNDP and @GlobalFund paid the salaries of over 23,000 health workers in Afghanistan. Deputy Representative @SBuzurukova said the initiative avoided collapse of the entire sector and shows the way for others to follow. https://t.co/b0gP4ZjDKr pic.twitter.com/ueDoqIU5AV

“We were able to save the lives of most critical patients, and we were able to support inpatient services, for more than 500 women and children”, she said.

With the weather turning from autumn warmth, to a freezing winter, she used some of the salary she had finally begun to receive, to get some blankets and other materials to keep her family safe.

The midwife is just one of the over 23,000 health workers, in nearly 2,200 health facilities in 31 provinces, that have received wages since the scheme got underway. UNDP has also paid for medicines and health supplies.

“Of course, it doesn’t solve all the problems; we are providing a temporary fix. But it helps. We are sending a message of hope to the Afghan people that not everything is lost, that they have not been forgotten.”

According to UNDP, this represents a significant financial aid package for the health sector. Before it was forthcoming, less than 20 per cent of these health facilities were fully functioning.

Ms. Buzurukova explained that all the healthcare workers who have received salaries, were identified by a group of 16 civil society organizations which contribute to a World Bank project, known as Sehatmandi.

To overcome the barriers presented by the liquidity shortage in the Afghan banking system, the agency had to combine several cash transfer instruments. 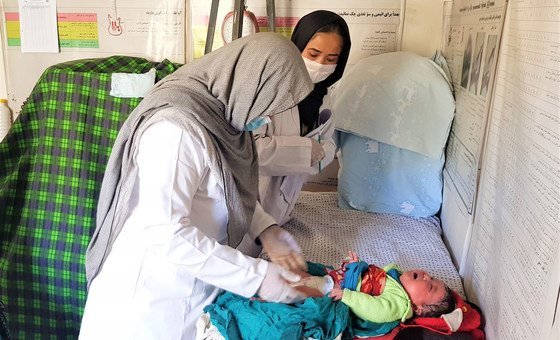 A midwife at a family health house in Daikundi, Afghanistan, provides care to a baby (file photo). , by © UNFPA Afghanistan

Millions of vulnerable Afghans continue to be at risk of losing access to primary healthcare, and the agency hopes others providing aid, will also join in the innovative new approach to keeping healthcare operational in the crisis-wracked country.

Ms. Buzurukova told us that the agency was in “very close communication” with the World Health Organization (WHO) and the UN Children Fund (UNICEF).

“They will continue with the payments. We are sharing the best practices, we are also sharing all the lessons learned”, she said.

Monthly salaries of Afghan health workers range from $150 for technicians, vaccinators, administrative workers or nurses, to around $700 for specialized doctors or surgeons.

With around 800,000 civil servants going unpaid for months, the project also opens the door to help other groups whose work is key to keeping the country running, such as judges and teachers.

The abrupt cutoff of foreign funding is threatening the entire economy, but many international organizations and States who provide aid, remain reluctant to work with the Taliban authorities.

Back in October, the UN Secretary-General urged the international community to “find ways to make the economy breathe again”. António Guterres believes this “can be done without violating international laws or compromising principles.”

“We must seek ways to create the conditions that would allow Afghan professionals and civil servants to continue working to serve the Afghan population”, he said.

We are not engaged with the de facto authorities, who are not recognized by the international community

“We are not engaged with the de facto authorities, who are not recognized by the international community. We want to provide directly to the doctors, to the nurses, who are dealing with the people, and support them”, she explained.

The Deputy Representative recently returned from Mazār-i-Sharīf, the fourth-largest city of Afghanistan, where she visited a hospital to see for herself the impact the new initiative is having. She was particularly interested in talking to women workers.

“It was really good to see that women are continuing in their jobs”, she said.

Women’s rights are one of the biggest areas of concern for the United Nations since the Taliban takeover, but Ms. Buzurukova remains hopeful for the future.

The visit to Mazār-i-Sharīf was part of a series of trips she has taken since August 15. She described talking to people in the streets, entering people’s houses, meeting families, the young, and older citizens.

“I was absolutely impressed by how strong they are”, she recalled. “There is a faith in the future, that they will overcome [the challenges]; that tomorrow will come, maybe not soon, but it will come.” 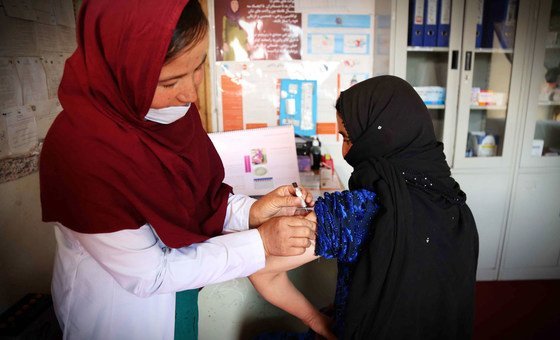 Forty years of war, recurrent natural disasters, chronic poverty, drought and the COVID-19 pandemic, have devastated the people of Afghanistan.

The recent escalation in conflict and resulting upheaval has only exacerbated needs and further complicated an extremely challenging context.

Even before 15 August, the humanitarian situation was one of the worst in the world. By the mid-year mark, nearly half of the population, some 18.4 million people, were already in need of humanitarian and protection assistance.

One in three Afghans were facing crisis or emergency levels of food insecurity and more than half of all children under five, were expected to face acute malnutrition.

Protection and safety risks to civilians, particularly women, children and people with a disability, were also reaching record highs.

The flash appeal, launched in September by the Secretary-General, is asking for an $606 million to avoid imminent starvation and disease. So far, it is only 54 per cent funded.

*Names of workers are being withheld, due to concerns for their safety.