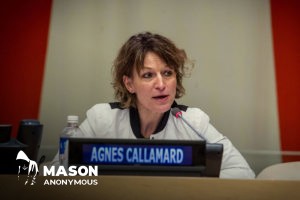 In a 100-page report to be presented to the Human Rights Council next week, Special Rapporteur Agnès Callamard discusses the circumstances leading up to Mr. Khashoggi’s death and considers steps that might have prevented his murder.

Saudi journalist Jamal #Khashoggi was the victim of a premeditated extrajudicial execution, for which the State of #SaudiArabia is responsible – report published today by @AgnesCallamard where she cites 6 violations of international law.

“The evidence suggests that the murder was premeditated and that the direction from superiors was to kill Mr. Khashoggi, at the very least if he would not agree to return,” her report states, suggesting that such an operation “was the result of elaborate planning involving extensive coordination and significant human and financial resources”.

In the days leading up to his execution, the journalist and other dissidents were “being sought” by Saudi authorities, so that “when the opportunity arose…Saudi high-level officials planned, oversaw and/or endorsed the mission”.

While there have been “numerous theories and allegations” about the killing, “none alters the responsibility of the Saudi Arabia State,” the Special Rapporteur maintains, adding that 15 Saudi state agents “acted under cover of their official status and used State means to execute Mr. Khashoggi”.

Given the fact that the killing represents no less than six violations of international human rights law, the Special Rapporteur determines that it constitutes an international crime over which other States “should claim universal jurisdiction”.

In an appeal to the Human Rights Council, the Security Council or the UN Secretary-General for an “international follow-up criminal investigation” to determine individual liability, Ms. Callamard notes with concern that so few States reacted to Mr. Khashoggi’s death, “whether legal, political or diplomatic, although a number of States had issued targeted sanctions against Saudi officials”.

Her report also determines that there was “credible evidence” that warrants further investigation of high-level Saudi officials’ liability, including that of Crown Prince Mohammed bin Salman.

In the years preceding Mr. Khashoggi’s execution, the report suggests that the Crown Prince “at a bare minimum” condoned the arbitrary detention of a large number of journalists and human rights defenders, but also princes and businessmen.

Mohammed bin Salman “took no action to prevent or punish those responsible…(and) willingly took the risk that other crimes, such as the killing of Mr. Khashoggi, would be committed, whether or not he directly ordered the specific crime”, the report states.

Turning to the trial in Saudi Arabia of those suspected of involvement in the killing, the Special Rapporteur questions the lack of transparency surrounding even the names of the accused.

According to the Saudi Deputy Public Prosecutor last November, of 21 individuals held in relation to the killing, 11 were indicted and five of them faced the death penalty.

These included the “Deputy President of the General Intelligence Presidency,” who had issued “an order to bring back the victim by means of persuasion, and if persuasion fails, to do so by force”, the prosecutor’s office reportedly said.

According to the Special Rapporteur, who names those indicted in her report, representatives of the United States, the United Kingdom, France, Russia, China and Turkey attended the trial in Riyadh.

Their presence was based “on an agreement of non-disclosure”, Ms. Callamard states, adding that according to some reports, “observers were summoned on short notice and barred from bringing interpreters”.

UN chief António Guterres said via his Spokespersons’ Office, that the Special Rapporteur’s report “contains many recommendations to different entities calling for different actions.  For his part, the Secretary-General will give full consideration to the recommendation regarding the protection of journalists, which is an issue that he has been very vocal about.”

He reiterated his view that the killing of Jamal Khashoggi, was a “horrendous crime that shocked people around the world”, which merited a “prompt, thorough and transparent investigation, and accountability for those responsible, with full respect for due process.”

The Secretary-General does not have the power or the authority to launch criminal investigations without a mandate from a competent intergovernmental body, he stressed to journalists on Wednesday in New York, as  “power and authority to do that, lies with Member States”.

If a full and effective criminal investigation is not conducted by Member States, the only way to effectively pursue an investigation, requiring the cooperation of relevant Member States, would be through a resolution of the Security Council, under the appropriate Charter provisions. All Member States should cooperate with those efforts”, said his Office.