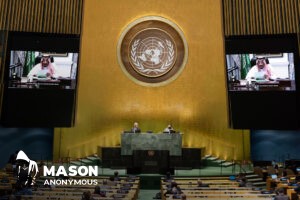 In a pre-recorded message to the Assembly’s general debate, the Monarch highlighted his country’s role as the president of the G20, coordinating international efforts to fight the disease and curb its humanitarian and economic impacts.

At a G20 Summit in March, the Saudi Arabia pledged $500 million to support efforts to combat the pandemic, and reinforce preparedness and responses, King Salman said.

Alongside, the Kingdom continues to support humanitarian and development globally for all people, irrespective of their political, ethnic or religious affiliations, he added, noting that over the past three decades, Saudi Arabia provided over $86 billion in humanitarian support, benefiting 81 countries.

“My country, ever since the foundation of this Organization, has been in the forefront among the nations working to achieve international peace and security,” the Monarch continued, adding that that it has been working to mediate and reach peaceful solutions to disputes and preventing conflict.

In his address, King Salman denounced Iran, which he said “exploited” friendly initiatives by his country, and “in line with its hostile attitude” targeted oil facilities in Saudi Arabia, in “blatant violation” of international law.

He also accused Iran of interfering in Yemen by supporting the coup carried out by “its surrogate,” the Houthi militia against the legitimate Government in the country, leading to a political, economic and humanitarian crisis that has affected millions.

Collaboration with the UN against terrorism

Highlighting the dangers posed by terrorism and extremism to the entire world, King Salman outlined his country’s support to international efforts to combat the scourge.

“The Kingdom supported the UN Counter-Terrorism Centre with a contribution of $110 million and established the Global Centre for Combating Extremist Ideology in Riyadh [and it] also hosts the International Terrorist Financing Targeting Centre,” he said.

King Salman went on to declare that his country will spare no effort to work together towards achieving a future with peace, stability, prosperity, and coexistence among all the region’s peoples.

He said that the 2020 Arab Peace Initiative provides the basis for “comprehensive and just solution” to the Arab-Israeli conflict, voicing his support for the efforts by the US administration towards peace in the Middle East.

As for the wider region, he voiced concern over the situation in Libya, and called for a peaceful solution in Syria.

The Monarch also declared that Saudi Arabia will stand with the people of Lebanon, in the aftermath of the catastrophic explosion in the port of Beirut, which he said, was a result of the “hegemony” of Hizbollah.