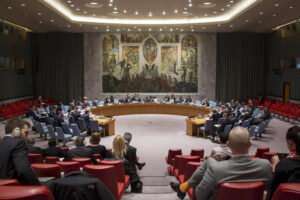 In a statement issued on Wednesday evening, the Council expressed deep concern over the violence, noting that “recent developments pose particular serious challenges for the voluntary, safe, dignified, and sustainable return of Rohingya refugees and internally displaced persons.”

The UN continues to monitor developments in Myanmar, where the army seized power in February.  Subsequent pro-democracy protests were met with brutal crackdowns.

This week, international media reported that the army has begun to amass heavy weapons and troops in Chin state, located in the northwest of the country, suggesting an imminent attack against militia groups which have surfaced since the coup.

Security Council members also underlined the importance of steps to improve the health and humanitarian situation in Myanmar, including the need to facilitate unhindered delivery and distribution of COVID-19 vaccines.

They reiterated their full support for the “positive and constructive role” played by regional bloc ASEAN in facilitating a peaceful solution, and underscored support for its Special Envoy.

“The Members of the Security Council reaffirmed their support for the people of Myanmar and the country’s democratic transition, and their strong commitment to the sovereignty, political independence, territorial integrity and unity of Myanmar,” the statement said.

Meanwhile, the humanitarian situation in Myanmar is deteriorating, UN relief chief Martin Griffiths said in a statement earlier in the week.

Rising conflict and insecurity, along with the pandemic and a failing economy, have left some three million people in need of assistance, while violence since the military takeover has forced hundreds of thousands to flee their homes.

Mr. Griffiths added that the situation in the northwest has become “extremely concerning” in recent weeks.

This follows an escalation in hostilities between the armed forces and the Chinland Defence Force in Chin state, and with the People’s Defence Forces in Magway and Sagaing regions.

Although humanitarians are providing assistance to people across the country, and are ready to do more, they remain hampered by lack of access and funding, he said.

Mr. Griffiths urged the international community to fully support a $385 million humanitarian plan for Myanmar, which so far is less than half funded.