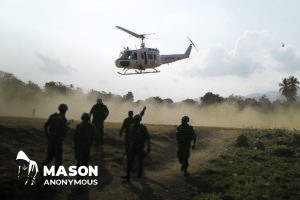 Today, we are transitioning from our peace operation @MINUJUSTH to a political presence in Haiti.

The @UN will continue to support Haiti 🇭🇹 and its people, with a seamless transition from peacekeeping to peacebuilding, and a focus on sustainable development. pic.twitter.com/cvOR8jZR5r

“This chapter, which comes to an end today, was characterized by shared successes with the people of Haiti, the tragedy of the (2010) earthquake, and by lessons in what we should have done better. Today, we must think together about all these aspects: They are the basis on which we can go into the next stage of the partnership of Haiti with the United Nations,” he said.

UN peacekeeping in Haiti began in 2004 with the United Nations Stabilization Mission in Haiti (MINUSTAH), established in response to a deteriorating political and security situation.

MINUSTAH concluded its mandate in 2017 and was followed by a smaller mission that supported reinforcement of the Haitian National Police, Rule of Law institutions and promotion of human rights, known by the French acronym MINUJUSTH. Effective on Wednesday, the United Nations Integrated Office in Haiti (BINUH) will begin work on strengthening political stability and good governance through support of an inclusive national dialogue.

As Mr. Lacroix put it: The UN was turning the page on peacekeeping in Haiti “but we are not closing the book on United Nations support.”

The two UN peacekeeping missions contributed to Haiti’s progress, including in improvements to policing, strengthening of the justice sector, and implementing community violence reduction programmes.

Although they created an enabling environment for political and democratic processes to take root in Haiti, Mr. Lacroix said more political solutions are clearly needed.

Haiti is currently in the midst of a political crisis, with thousands taking to the streets in recent weeks to demand the resignation of President Jovenel Moise. At least 30 people have been killed since mid-September, according to UN estimates.

The President has issued a call for national dialogue and the formation of a unity Government, but opposition groups want him to stand down, as a precondition for talks.

“We encourage the Government of Haiti to continue a peaceful dialogue that results in a parliamentary government that strengthens the rule of law and anti-corruption institutions. Likewise, we urge Haiti’s political, economic and civil society stakeholders to work peacefully to address the most pressing economic and social challenges facing the country,” she said.

The new UN office, BINUH, will continue to work with the Government and partners on legacy issues from the peacekeeping period, such as eliminating cholera and addressing cases of sexual exploitation and abuse, including paternity cases.

Patrick Saint-Hilaire, chargé d’affaires at the Haitian Mission to the UN, spoke of the need for continued training for the security forces, who also require proper equipment and other resources.

“It is urgent for state authority to be restored in an unlimited, bloodless fashion in all areas which are unfortunately described as not being under the rule of law,” he said.

BINUH signifies a transition from peacekeeping to peacebuilding, and the office will have benchmarks that reference the Sustainable Development Goals.

For example, the national police and related institutions, such as those in corrections and justice, will operate under improved legal frameworks and oversight mechanisms in line with the development objective of promoting peaceful and inclusive societies.

“The progress in Haiti over the past 15 years is considerable but the achievements of stability are still fragile and must be deeper rooted in democracy and development,” Mr. Lacroix stated, adding that “the beginning of BINUH’s operations tomorrow is a renewal of the UN commitment to Haiti’s stability and prosperity.”