“Women’s rights are not Western rights”, she said, addressing the Council in her role as Chairperson of The Elders, a group of global leaders working for peace and justice across the world, founded by Nelson Mandela in 2007. “They are fundamental human rights, which women had reclaimed in accordance with their cultural values.”

Ms. Robinson, also the former UN High Commissioner for Human Rights, called on China and the Russian Federation, in particular, to encourage the Taliban to recognize that the participation of women in society and the education of girls on an equal basis with boys, are non-negotiable and must be respected.

“Collectively, you have all been entrusted with a powerful mandate to act on behalf of the United Nations,” she recalled.  “A united, purposeful Council is needed now more than ever.”

The issue was one of several raised by Ms. Robinson and Lakhdar Brahimi, Elder Emeritus and former Foreign Minister of Algeria, who noted that the mandate of the United Nations is to protect the fundamental rights of all Afghans – including women and girls, those internally displaced, all minorities and human rights defenders – efforts that will require the Council’s support.

Offering his views on the situation, he recalled that attempts by Afghanistan’s [former] Vice-President Amrullah Saleh and Ahmad Massoud, son of late commander Ahmad Shah Massoud, to resist in the Panjshir Valley appear to have been defeated on 5 September. The Taliban now exercise near sole control over the country.

“Afghanistan today is not the Afghanistan I knew in the late 1990s and from 2001 to early January 2004,” he said.  “To say that the humanitarian situation is dire would be an understatement and the needs are most urgent.” 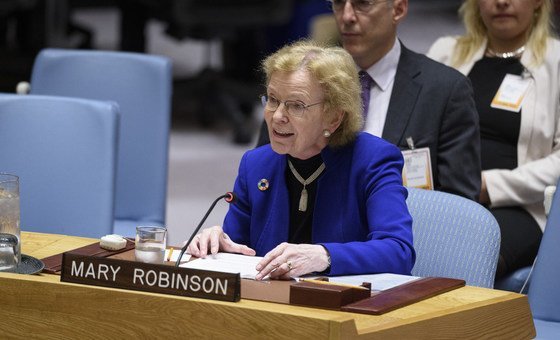 Yet, he said the flow of aid has stopped abruptly and the inclination of donors now is to abandon Afghanistan, because the Taliban have taken control of the country.

Most in the international community do not wish to deal with the Taliban, nor are they ready to grant diplomatic recognition to the Government that the Taliban is still in the process of finalizing.

Mr. Brahimi said that while some Taliban leaders attempt to speak with one voice, others say they will return to practices followed during their previous rule, following the 11 September attacks on the United States.

Still others say they will reach out to their opponents to form a genuinely inclusive Government. In the meantime, Mr. Brahimi said Afghanistan’s institutions are paralyzed and its people abandoned.

“Famine and despair look like the inescapable fatality for millions of men, women and children,” he added.  As a first, extremely urgent step, the Secretary-General – acting with the full support of a united Security Council – should send a Special Representative to Kabul to start a frank discussion with the Taliban leadership, he stressed.

A crucial humanitarian programme must be put in place, he said, recalling that the Taliban did not interfere with the work of local staff after internationally recruited personnel were withdrawn in the 1990s.

The UN Assistance Mission in Afghanistan (UNAMA) is needed now more than ever before, he said, proposing that the Council limit its upcoming mandate renewal to a technical rollover of six months in order to strengthen it for the new coming phase.