Only 2 days to go! 🌍#COP26 is the world’s last, best chance to tackle #ClimateChange.#TogetherForOurPlanet

“Even if recent pledges were clear and credible, and there are serious questions about some of them, we are still careening towards climate catastrophe”, he said.

Under the best-case scenario, temperatures will rise well above two degrees, which Mr. Guterres called “a disaster”.

“If we want real success…we need more ambition and more action”, he said.

This will only be possible with a “massive mobilization” of political will and that requires trust, he said, which, amidst “serious questions of credibility”, is in “short supply”.

The UN chief said there were “dangerous levels of mistrust” among the G20 bloc, and between developed and developing countries, including emerging economies.

“The most important objective of this G20 Summit must be to re-establish trust – by tackling the main sources of mistrust – rooted in injustices, inequalities and geo-political divides”, he underscored.

The Secretary-General appealed to the G20 for decisive steps to “bridge the trust gap”, beginning with vaccine inequality.

Because of divisions, he said that a G20-led COVID-19 vaccination plan never materialized as “global coordinated action has taken a backseat”, to vaccine hoarding and nationalism.

He joined the World Health Organization (WHO) in supporting its new Global COVID-19 Vaccination Strategy to get 40 per cent of people in all countries vaccinated by year’s end, and 70 per cent by mid-2022.

“I urge G20 countries to fully support this strategy and coordinate their actions for success”, he said. “That is the only way to end the pandemic for everyone, everywhere”.

As advanced economies are investing nearly 28 per cent of their Gross Domestic Product into pandemic economic recovery, middle-income nations can devote only 6.5 per cent and least developed States, less than two per cent – a vast disparity that Mr. Guterres said, adds to the trust deficit. 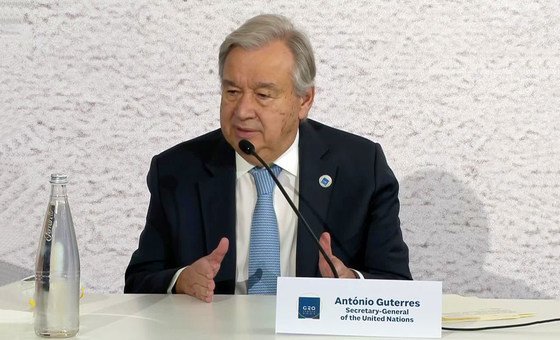 Calling it “immoral”, he observed that “recovery is amplifying inequalities”.

Meanwhile, the International Monetary Fund (IMF) projects that over the next five years, cumulative economic growth per capita in Sub-Saharan Africa will stand at a staggering 75 per cent less than the rest of the world.

“Countries should not be forced to choose between servicing their debt or serving their people”, said the UN chief, urging the G20 to extend the Debt Service Suspension Initiative into next year and making it available to all highly indebted vulnerable and middle-income countries that request it.

Climate ambition from all

Trust is also being undermined by a lack of climate action, he upheld, calling for greater ambition on mitigation to get the world on a credible pathway to 1.5 degree Celsius – a target that science maintains is the only sustainable future for the planet.

This requires concrete action now to reduce global emissions by 45 per cent by 2030, said the Secretary-General, noting that as they represent around 80 per cent of emissions, G20 countries must shoulder the responsibility for keeping the 1.5-degree goal alive.

However, emerging economies must also “go the extra mile” to achieve effective global emissions reductions in this decade, he asserted.

“We need maximum ambition, from all countries on all fronts”, according to Mr. Guterres. “Ambition on adaptation means donors…allocating at least half of their climate finance towards adaptation and resilience”.

We need maximum ambition, from all countries on all fronts — UN chief

Ambition on climate finance includes making good on the commitment to provide $100 billion each year to developing countries.

Amidst delays and without clear guarantees, the UN chief said that the message to developing countries is essentially: “The check is in the mail”.

“On all our climate goals, we have miles to go.  And we must pick up the pace. Scientists are clear on the facts. Leaders must be as clear in their actions”, he stated.

Maintaining that Glasgow, where COP26 begins officially on Sunday, can be “a turning point towards a safer, greener world”, the Secretary-General concluded saying, “It is not too late. But we must act now”.