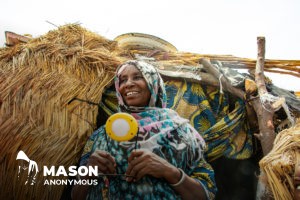 El-Miskin, where Hauwa and her family are sheltering, sits at the edge of the capital of Borno State, Maiduguri. It is one of several camps for internally displaced people (IDP) in the region, victims of the fighting between armed groups and Nigerian forces that has persisted for almost a decade.

Newcomers to El-Miskin camp live in makeshift shelters made of straw, and energy is hard to come by. This means that safety is an issue, particularly for women and girls: without proper lighting, they often have to walk in the dark to use the latrines and other water, sanitation and hygiene facilities. For Hauwa, even the cost of batteries to power a small lamp is beyond her means, so when she, along with 1,405 others, was given a solar-powered lamp – donated by GOGLA, the global association for the off-grid solar energy industry – in early April, as part of the IOM initiative, her daily routine improved drastically. 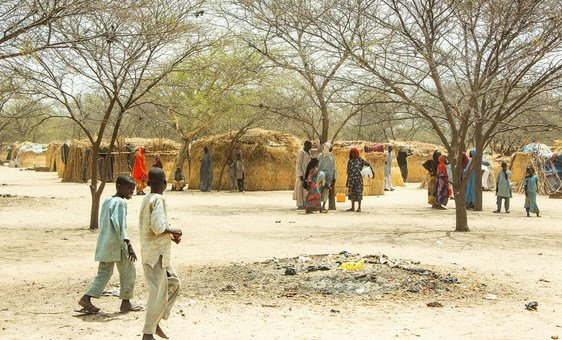 Hauwa recalls that during the distribution of the lamps, IOM staff assisted her and taught her how to use it. “I think it is very easy to use,” she says as she proudly shows IOM staff how to fix the lamp on her roof to charge it. With the lamp, Hauwa feels safe when she uses the latrines at night. “The lamp helps me see the path when it’s dark, but I still need to be careful not to step on a lizard!” she jokes.

But safety is not the only advantage that renewable energy has brought to humanitarian camps, as Djamila Fatime Harine, a Nigeria-based IOM Programme Manager explains. “With solar lights, children can continue to learn without the health and safety risks of smoky firewood or kerosene lamps, which also pose health hazards such as burns and respiratory problems”.

Where there is a large-scale concentration of refugees, anything that can reduce the need to burn wood, would have a huge impact. In Bangladesh, near the border with Myanmar, for example, some 700,000 Rohingya refugees have few options other than firewood for their household energy needs. The UN refugee agency, UNHCR, estimates that a staggering 820 tonnes of trees – equivalent to 4 hectares – are being cut down for firewood by Rohingya refugees every day.

This is causing tensions with local people, who want to protect their natural resources and livelihoods, and increases the risk of assaults on refugees. As for the health risks, the smoke created by around 191,000 families in such a densely populated area is having a negative effect on the whole population, especially those directly involved in tending fires and cooking.

Cases such as Bangladesh explain why UNHCR, IOM, and other humanitarian organizations, have a strong motivation to find ways to power refugee camps with cheap, clean energy. For example, at UNHCR’s two largest refugee camps, in Jordan, a solar plant has been providing clean, reliable electricity to over 100,000 Syrian refugees since 2017. Whilst it cost US$17.5 million, it is now saving the agency an estimated US$12.5 million per year in energy costs, and cutting carbon emissions by around 20,000 tons a year.

In South Sudan, where thousands of displaced people fled to a UN-protected base in Malakal, in the Upper Nile region, following attacks on communities in 2013, clean water was a priority. IOM initially trucked in water, and then began using diesel-run generators to pump in water from the Nile. 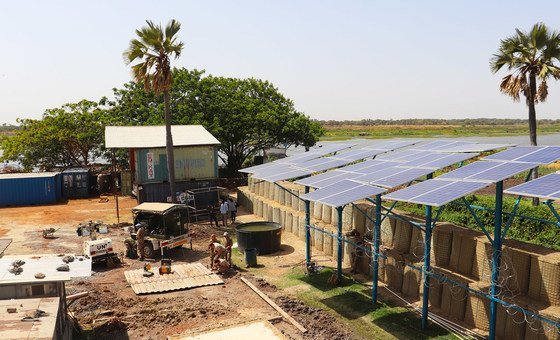 However, since last year, the camp’s supplies come from a solar-powered pump, providing some 29,000 residents, and around 300 humanitarian workers, with around 20 litres of water every day. The environmental footprint of the camp is now much smaller, as fuel consumption has dropped drastically. This also means that the pump will have paid for itself by the end of 2019, thanks to savings on transportation and diesel fuel.

With the costs of renewable energy installations continuing to fall, more and more humanitarian centres will be powered by clean power sources, and reduce their reliance on fossil fuels. To speed up the process, a group of UN-related bodies, led by IOM, have made the switch to clean energy a priority, and joined together to bring about a global sustainable energy plan of action, part of the aim to achieve Goal 7 of the UN’s 2030 Agenda for Sustainable Development: safe access to affordable, reliable, sustainable and modern energy services for all displaced people.