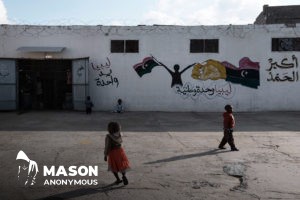 Speaking to journalists in Geneva, Joel Millman from the International Organization for Migration (IOM), said that six children were among the fatalities at the Tajoura site, where the more than 600 detainees came from at least 17 mainly African States.

No confirmation that guards fired on fleeing migrants

Some 350 migrants – among them 20 women and four children – are still being held at Tajoura, the IOM spokesperson added, noting that he was unable to confirm reports that guards had fired on migrants trying to flee.

Today, @IOM_Libya team in #Tajoura continues to provide much needed assistance to the migrants. pic.twitter.com/Kzh5JsCRER

In the aftermath of Tuesday’s devastation, the head of the UN Support Mission in Libya (UNSMIL) and Special Representative of the Secretary-General, Ghassan Salamé, led calls for an international inquiry, insisting it could “clearly…constitute a war crime”.

Echoing that appeal, UNHCR’s Charlie Yaxley noted that both parties involved in the fight for Tripoli – the UN-recognised Government and forces loyal to self-styled Libyan National Army commander, Khalifa Haftar – knew where civilians were sheltering.

“We reiterate once again that the coordinates of these detention centres in Tripoli are well-known to both sides of the conflict and this was a preventable tragedy that never should have happened”, he said, while also noting that refugees had been “severely traumatized” after seeing fellow detainees dying.

“They spoke in a state of shock, they spoke to us about seeing their fellow detainees’ body parts dismembered around the centre,” he said.

According to IOM and UNHCR, 3,300 migrants and refugees remain arbitrarily detained inside and around Tripoli.

IOM’s Mr. Millman further noted that approximately 180 of the 600 people held in Tajoura had agreed to be evacuated under IOM’s voluntary repatriation programme, and that two of them had died in the airstrikes.

“We are not able to verify who is responsible for the attack, that’s why there needs to be this independent investigation”, UNCHR’s Mr. Yaxley said.  “What we can say is that, is at this point there does need to be greater efforts, far greater efforts from the international community, particularly amongst those States who have leverage over the warring parties to bring an end to the violence.”

Addressing the dangers faced by those being held in Libya, Mr. Yaxley cited concerns that “some of these detention centres may be being used to store weapons and military equipment. We remind all parties that conflict is using civilian infrastructure in that way, would be a violation of international humanitarian law and must be avoided at all costs”.

In addition to the Tajoura tragedy, IOM also reported that more than 80 migrants are feared drowned after their vessel capsized while trying to reach Europe from the Libyan port of Zwara.

“The survivors told IOM staff that the inflatable boat carrying 86 people including four women and two children, left Zwara around 6am on 1 July”, Mr. Millman said. “A few hours later, the boat began to leak and capsized during the confusion and frantic movements of the dozens of people on board.”

Noting that “this is not the first such tragedy this year”, IOM said in a statement that two rescues were carried out in May on two overloaded crafts.

On one vessel, 59 people went missing and 16 were rescued; on the second, 69 were saved. Both boats reportedly left Zwara.

So far this year, the UN migration agency has reported 426 deaths from drowning linked to attempts to cross the central Mediterranean route to Europe.

Some 3,750 people have been returned to systematic and arbitrary detention—where they remain at risk as clashes continue in Libya’s capital, IOM noted.

The Members of the Security Council issued a Press Statement on Friday afternoon in New York, condemning the attack on the detention centre. They “stressed the need for all parties to urgently de-escalate the situation and to commit to a ceasefire.”

They “called on all parties rapidly to return to UN political mediation and reaffirmed their full support for the leadership of the UN Special Representative of the Secretary-General, Ghassan Salamé.  Lasting peace and stability in Libya will come only through a political solution” the statement continued, noting “ongoing efforts in support by the African Union, the Arab League and others.”

Council members also expressed “deep concern over the worsening humanitarian situation in Libya” calling for full access to be given to humanitarians.

They also expressed their ongoing concern over the conditions in the detention centres which are “the responsibility of the Libyan Government”, and called on “all Member States not to intervene in the conflict or take measures that exacerbate the conflict” within Libya.