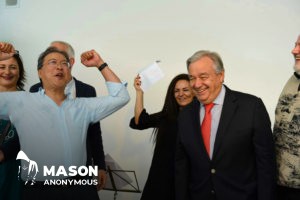 He was speaking against the backdrop of European Parliamentary elections in recent days, which showed a surge in support away from political parties in the centre ground, towards those espousing more nationalist and anti-immigrant policy platforms.

“This is the world we want: a world in which contributions from everybody, everywhere matter” – @antonioguterres at music workshop #WithRefugees and @YoYo_Ma in Vienna. https://t.co/4SqrNiCOrb pic.twitter.com/s3rHnvcqYD

Secretary-General Antonio Guterres told those gathered for the Day of Action that it was particularly important “in the present debate in Europe” to adopt “a universal perspective for peace, for human dignity, for human rights” and the values enshrined in the UN Charter.

“Societies today are multi-ethnic, multi-religious, multi-cultural. And that is a richness, not a threat”. Like an orchestra featuring musicians from around the world, they need to practice to play harmoniously: “It is the with society” he added.

“Diversity requires investment. Social, cultural, political, religious; sometimes investment in social cohesion – to make sure that in a diverse society, every community feels that their identity is being respected – like the identity of the violinist needs to be respected, together with each instrumentalist.

Hailing music as a fundamental tool to promote UN values, he said the Day of Action was fundamental to the future of the Organization “especially when we are also discussing the dramatic situation of human mobility”.

Speaking after meeting Austrian President Alexander Van Der Bellen, Mr. Guterres praised the nation for its support for the UN Office at Vienna over the past 40 years, home to many key agencies and bodies.

As one of the main headquarters, he said he was convinced the work done in Vienna would help preserve peace and security for the world, during trying times.

He looked ahead to Tuesday’s Austrian World Summit on climate, saying that taking part was essential to him, having convened the Climate Action Summit this coming September.

Fresh from a major fact-finding visit to the South Pacific, Mr. Guterres said that to rescue an island State such as Tuvalu – parts of which are already sinking below the waves due to rising sea levels – was “to rescue the planet”.

“The climate crisis is something that will have an impact on the lives of everybody everywhere”, said the UN chief. “And to reverse the present trend in which climate change is running faster than we are is an absolute must. And for that, we need in 2020, countries to assume engagements much stronger than the ones that were assumed in Paris.

He said nations had to commit “to a much more ambitious set of measures in mitigation in adaptation, mitigation and in finance. And I must tell you that I consider absurd that we are taxing salaries, we are taxing income, and not taxing carbon”.