James Swan, Head of the United Nations Assistance Mission for Somalia (UNSOM), told the Security Council that 2.6 million internally displaced persons are particularly at risk from the novel coronavirus.

In its latest situation report, the World Health Organization (WHO) on Wednesday put the number of confirmed cases in Somalia at 1,502, with 59 deaths.

Even before the outbreak, more than 5 million Somalis required humanitarian assistance, Mr. Swan said, as the country continued to deal with the al-Shabaab terrorist insurgency and a major locust invasion that is putting food production in peril.

COVID-19 is also having a severe economic impact, with remittances from the Somali diaspora dwindling and the federal Government projecting an 11 per cent drop in nominal GDP this year, he said.

Nevertheless, the Federal Government and Federal Member States have responded quickly to the crisis “within their means,” he said, with Prime Minister Hassan Khaire leading a National COVID Task Force and the six regional states participating in national-level coordination efforts. 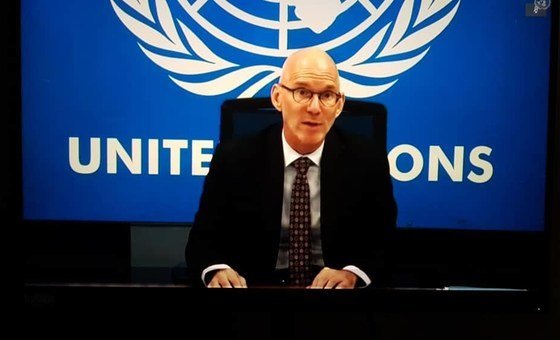 UNSOM head James Swan at the Security Council on 21 May 2020.He says that despite severe COVID-19 effects, Somalia is making progress on State-building priorities including preparing for one-person-one-vote elections., by UNSOM

“The UN family is working to reinforce the Government’s response”, he said, noting that the WHO is helping to expand Somali hospital and testing capacity, with the United Nations Development Programme (UNDP) also providing electricity generators.

Somalia’s response is greatly aided by having achieved the so-called decision point under the Heavily Indebted Poor Countries (HIPC) Debt Initiative, on 25 March, enabling it to tap into additional budget support and grant financing from global institutions, he said.

Looking beyond the immediate health crisis, Mr. Swan – speaking from Mogadishu via video-teleconference – said the coming weeks will be decisive in determining how Somalia will proceed with its first direct elections since March 1969.

In the coming weeks, a parliamentary Ad Hoc Committee will make recommendations to resolve outstanding electoral issues, while the head of the National Independent Electoral Commission will report on plans to conduct the vote within a constitutional timeframe.

The pathway to a vote for all

“These Somali institutions will determine the pathway to elections,” said Mr. Swan, urging Somalia’s partners to be ready to mobilize the technical support and financial resources needed to make the landmark polls a success.

Turning to the security situation, he said that Somalia has made progress in recovering areas occupied by al-Shabaab, including the strategic town of Janaale, liberated by the Somali National Army and the African Union Mission in Somalia (AMISOM) on 16 March.

“We regret that al-Shabaab has not embrace the Secretary-General’s appeal for a global ceasefire (in response to the pandemic) and that their terrorist operations continue unabated,” he said.

He added that regrettably, due to COVID-19, the pace of future military operations could be impacted by a slowdown in international partner training needed for the fight against the terrorist group.