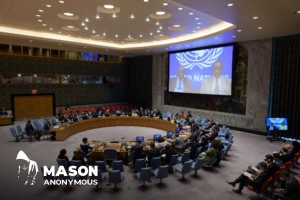 Briefing the Council, Raisedon Zenenga ,the Deputy Head of the UN Assistance Mission in Somalia (UNSOM), reported that the country had made significant progress on its economic and security sector reforms. There had also been progress on the inclusive politics agenda as well, including the constitutional review process and preparations for the universal suffrage elections.

“The Federal Government has decided to apply the same rigorous approach to bring accountability and transparency to the security sector,” he said, noting, among other recent steps, the completion in March of biometric registration of all Somali National Army soldiers. All 16,000 soldiers registered were now receiving their salaries directly into their bank accounts.

“This has cut out middle men, reduced corruption, and ensures regular payment of salaries to military personnel. It also paves the way for rightsizing the National Army,” said Mr. Zenenga.

In parallel with these security sector reforms, the Federal Governments had launched military operations in Lower Shabelle region to advance the Transition Plan, degrade Al Shabaab in strongholds that are contiguous to Mogadishu and thereby halt the recent increase in Al Shabaab attacks in the capital.

Yet, Somalia continued to grapple with significant challenges, he said, explaining that the Federal Government’s reform efforts have encountered “inevitable” resistance. The economic reforms and security sector reforms entail dismantling a war economy that had flourished for decades.

“There are many vested interests which pose obstacles to increased accountability. Taking on these vested interests requires not only the determination, which the Federal Government has shown, but an inclusive approach of building relationships with all stakeholders to demonstrate that the reforms will yield benefits for the whole nation,” Mr. Zenenga stressed.

He also noted that the dialogue between Somalia and Somaliland, which also has implications for the completion of the constitutional review process, remains stalled. “We are, however, encouraged by ‘Somaliland’ President Muse Bihi’s remarks on 18 May expressing his readiness to promote peace with Puntland, including through the exchange of prisoners, and to cooperate with Somalia on issues related to security, trade and education.”

Recalling that UNSOM began the new year facing a security crisis as a result of the mortar attack on the UN compound on 1 January, and a political crisis as a result of the expulsion of the Special representative of the Secretary-General Nicholas Haysom on the same day, Mr. Zenenga said the two incidents had severely disrupted the Mission’s engagement with the Federal Government of Somalia and had also elevated the security risk level for UN personnel and left our staff deeply demoralized.

While the Mission had immediately prioritized the safety and security of its staff while concentrating political efforts on mending relations with the Federal Government, Mr. Zenenga underscored that a lasting solution to the continuing security threat “will come from denying Al Shabaab the space and opportunities to prepare and launch attacks.”

Despite such challenges, he said Somalia has “immense opportunities” to make further progress in the coming months. He set out the following prescription for making headway:

“The trajectory is upward, and we can all work together to energize Somalia’s population and their international partners towards reform and progress,” he concluded.

Somalia’s humanitarian situation ‘among the most protracted in the world’

She said that the 2019 Humanitarian Response Plan, launched in January, identified 4.2 million Somalis – one third of the population – in need of life-saving assistance and protection. This shows a decline in needs from 2017, when famine was averted, raising hope that resilience activities led by the Government and development partners could make further gains.

“However, current humanitarian indicators across the country are showing a deterioration,” said Ms. Mueller, spotlighting three areas of concern: the severe drought conditions that have spread from northern and central areas throughout the country following two failed rainy seasons; the situation of internally displaced persons; and protection concerns.

“We must act now to avert a major humanitarian crisis. Humanitarian partners stand ready to deliver aid to those most in need and are capable of rapidly scaling up response, as was proven during famine prevention efforts in 2017,” said, but cautioned that significant funding shortfalls are constraining response and leading to a reduction in assistance in critical areas, including health, nutrition, food security, and water, sanitation and hygiene.

“I believe I was invited to brief you today to draw attention to the elevated risk of a major humanitarian crisis unfolding on the horizon. The immediate scale up of humanitarian response is essential to mitigate the impact of the drought and to prevent further breaking up of communities that continue to be fragile from the drought in 2017,” she said.

She encouraged the international community to urgently increase support for life-saving drought response efforts and to protect gains made in 2018, and added that it was here hope that immediate resources will be received to help us prevent a dramatic crisis from escalating.