“The Secretary-General welcomes the announcement of the cabinet of South Sudan’s Revitalized Transitional Government of National Unity”, said the statement from Secretary-General António Guterres, issued by his Spokesperson on Friday night in New York.

“He commends the spirit of compromise and collaboration displayed by the parties which led to this important development”, it continued. “He encourages the South Sudanese parties and their leaders to make additional efforts to meet the 35 per cent quota for the representation of women throughout the peace process.” 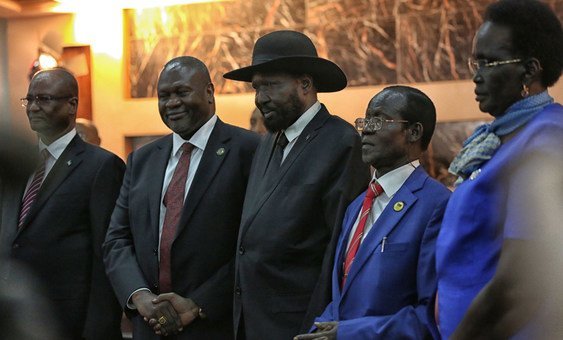 According to news reports, President Kiir named 34 ministers and 10 deputies in the televised announcement, following weeks of negotiation over the new Government, that was announced in the South Sudanese capital Juba, last month.

Following the urging of the Security Council, Inter-Governmental regional grouping IGAD, the African Union, and others, the deadlock in fulfilling a comprehensive 2018 peace agreement to end years of brutal conflict across the world’s youngest nation, was broken in February, when Mr. Machar was sworn in as First Vice-President.

The head of the UN peacekeeping mission in South Sudan (UNMISS), David Shearer, told the Council last week that the two former rivals had both compromised, “moving the country further along the road to sustainable peace.”

“Our actions can push South Sudan further toward sustainable peace; our inaction can help condemn it to failure”, he told the Council.

“International partners must remain engaged – both in solidarity and, at times, with pressure – to encourage compromise to achieve and maintain the unity”, Mr. Shearer added. “South Sudan’s future depends on it”.

“The Secretary-General calls upon the leaders of South Sudan to prioritize the implementation of transitional security arrangements, step up efforts to address inter-communal violence, fight impunity and focus on the delivery of essential services”, said the UN chief’s statement.

“The Secretary-General reiterates the readiness of the United Nations to assist the parties in implementing the Agreement, in close coordination with the Inter-Governmental Authority on Development (IGAD) and the African Union.