“Civilians with whom we spoke still raised numerous concerns that they feel are barriers to sustainable peace,” said Yasmin Sooka, Chair of the UN Commission on Human Rights in South Sudan, reporting from Juba on the panel’s seventh field mission, currently under way through 29 August and which includes South Sudan, Uganda, Ethiopia, and Kenya. 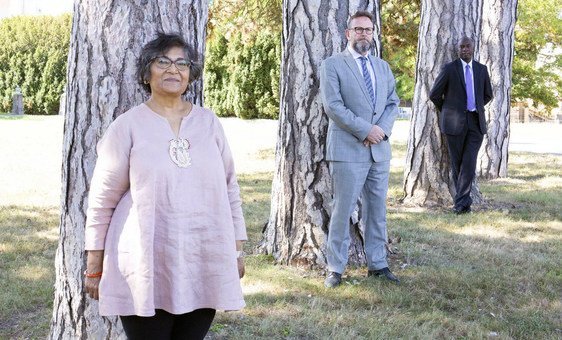 During their visit, the three Commissioners listened to South Sudanese women, men and children express numerous concerns, including the localization of conflict linked to land, resources, and cattle; and inefficiencies in implementing the Revitalized Peace Agreement, which, signed by the warring parties in September 2018, has been commended as a significant development toward the dawn of peace.

They are also worried about deteriorating living conditions for the internally displaced, security and the continued shrinking space for civic engagement, among many other concerns.

“Despite the numerous challenges we heard, we were encouraged by the fact that committees composed of military and civil actors have been formed to improve civil-military relations and support local justice and reconciliation in Yei River state, where civilians could raise dispute resolutions,” said Commissioner Andrew Clapham.

“Such mechanisms that facilitate communication between armed actors and civilians could be replicated in other locations where violent conflict and violations have been witnessed in the country,” he added.

Apprehension over continued impunity for sexual and gender-based violence, which is still at an all-time high, was another major concern – as survivors of sexual violence remained with only limited access for redress.

In Bentiu, the Commission heard testimonies of sexual violence from women who are waiting to share their stories with an accountability mechanism.

“The lack of progress in establishing transitional justice mechanisms, including the Hybrid Court, the commission for truth, reconciliation, and healing and the compensation and reparation authority, which are to be complemented by customary and other community-centred mechanisms, is delaying accountability and reparation for these and other crimes,” said Commission member Barney Afako.

He continued, underscoring that “so long as the voices of victims and survivors are not empowered, and these mechanisms not put in place, it is highly unlikely that South Sudanese women, men, girls, and boys will be able to witness a lasting peace”.

In closing, the Commission stressed the importance of overcoming delays regarding the Revitalized Peace Agreement, and encouraged the positive work being carried out by the National Constitutional Amendment Committee.

The current mission will continue until Monday, after which the Commissioners will separately visit Uganda, Ethiopia and Kenya until 29 August.

The UN Commission on Human Rights in South Sudan is an independent body mandated by the Geneva-based UN Human Rights Council to, among other things, determine and report the facts of and clarify responsibility for alleged gross violations and abuses of human rights and related crimes, including sexual and gender-based violence, with a view to ending impunity and providing accountability.

The Commission will present an oral update on the human rights situation in South Sudan to the Council on 16 September and a comprehensive written report in March 2020.