These Special Rapporteurs often find themselves caught in the crosshairs of international and domestic politics. Independent of governments and institutions – including the UN’s Human Rights Council, which appoints them – they occupy a unique investigative role that allows them to shine a light on alleged violations perpetrated across the world.

The experts have mandates to “report and advise”, both as specialists focusing on specific forms of abuse of international human rights law; such as torture, human trafficking or the right to privacy; but also to carry out country-specific investigations.

Officially they are part of the Special Procedures of the Geneva-based Human Rights Council, whose members are elected in the UN General Assembly, but they are volunteers, not UN staff – nor are they paid for what they do.  Theirs is a powerful pulpit from which to serve as a voice for the voiceless.

The Special Rapporteurs come to UN Headquarters every October to update the General Assembly on their findings.

During their time in New York, UN News spoke to some of these dedicated experts about what drives them to do the job, which often sees them criticizing States and other powerful institutions, on behalf of vulnerable people across the world.

‘We cannot afford to stay silent’

From investigating the killing of Saudi journalist Jamal Khashoggi, to condemning the arrest of Wikileaks founder Julian Assange, Agnès Callamard, the Special Rapporteur on extrajudicial, summary or arbitrary executions, has often found herself in the news.

Throughout her career, Ms. Callamard has been devoted to human rights and humanitarian causes. She combines her UN role with her position as Director of Columbia University’s Global Freedom of Expression initiative and, prior to that, spent nine years as the Executive Director of ARTICLE 19, the international human rights organization promoting freedom of expression globally.

We caught up with Ms. Callamard when she came to the United Nations to report on her portfolio this October. Making full use of the freedom of expression to which she, as an independent expert is entitled, she shared her views on some of the high-profile cases with which she has been involved.

The murder of Jamal Khashoggi, just over a year ago, was particularly shocking, she told UN News, and not just for the gruesome details examined by the human rights inquiry into the killing, which she led: “The other thing that shocked me was the attempts by governments around the world to move on. Some governments made strong statements but, very quickly, there was an attempt to move on to business as usual”.

“I was shocked by the G20 Meeting in Osaka, when the US President literally embraced the Crown Prince of Saudi Arabia, a few days after I published the finding of my report, which raises extremely serious questions regarding the responsibility of the Crown Prince”, she said. “It was so inappropriate for the US President to go out of his way to demonstrate his affection for the Crown Prince, just as it was shocking to see the silence of everyone else in the room at that G20 meeting”.

“It’s one thing not to act, but it’s another thing to be silent altogether. And we cannot afford for human rights-friendly Governments to be silent in the face of, or when confronted with, the manipulation and politicization of meetings, when witnessing the trampling on human rights protection”.

The commitment to those who fight for their values, to countries that fight for justice and for others, is the way I was raised Agnès Callamard

Ms. Callamard’s devotion to human rights is deep-seated and, she told UN News, has its roots in her childhood: “I could not conceive of my life and my work without a commitment to social justice and human rights protection. This is how I was raised as a child. Every year I paid respect to my grandfather who had joined the French resistance and was killed by the Nazis, and to others who had been killed on that same day”.

“The commitment to those who fight for their values, to countries that fight for justice and for others, is the way I was raised. It was almost a natural journey to find myself doing the work I’ve done for the last 20 years, from human rights, to women’s rights, freedom of expression, to rights in conflict situation. To become a Special Rapporteur is a way for me to explore how to make the best of use of what I have learned, and contribute to the protection of human rights around the world.”

As one of the more high-profile Rapporteurs, calling out Governments and Heads of State, Ms. Callamard has frequently been the subject of criticism and attacks. In 2017, for example, Philippines President Rodrigo Duterte insulted her, and made threats of physical violence, in response to her comments on the country’s “war on drugs” campaign, that has led to thousands of deaths.

Ms. Callamard told UN News that she is unconcerned by such attacks, citing the safety in numbers that comes from the fact that many of the statements released by Special Rapporteurs are jointly issued:

“We feel stronger in our determination because numbers play a role. That doesn’t stop social media trolls, or governments, from criticizing us, sometimes in terms that are really inappropriate. But this is nothing, compared to the threats experienced by the people on whose behalf we are working”.

Fighting antisemitism, the ‘canary in the coalmine of global hatred’

Over the past 12 months, the world has seen a rise in antisemitic violence, prompting UN Secretary-General António Guterres, to warn in January that “the old antisemitism is back – and getting worse.”

Delivering his report on antisemitism to the General Assembly, Ahmed Shaheed, Special Rapporteur on Freedom of Religion or Belief, described antisemitism as the “canary in the coalmine of global hatred”, which “poses a threat to all societies if left unaddressed”.

A citizen of the Maldives, Mr. Shaheed twice held the office of Minister of Foreign Affairs in his country, and led the Maldives’ efforts to embrace international human rights standards between 2003 and 2011. He is currently Deputy Director of the Essex Human Rights Centre (more information here). 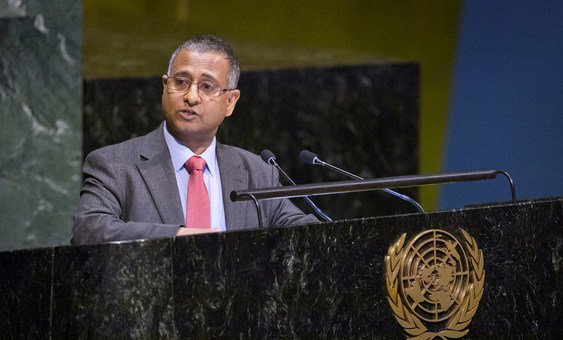 Mr. Shaheed’s previous UN role was Special Rapporteur for human rights in Iran, during which time he faced significant criticism from the Iranian authorities, and was eventually barred from entering the country. For him, this goes with the territory: “I think every time someone speaks up for human rights, there’ll be somebody who will not be happy with that.

If you are speaking up for what is right, then you have to prepare to face the criticism that comes with it, and what enables me to go on, is the fact that there are people who need attention, and there are people who find value in the work. I do that despite opposition from governments. Very often, however, they take notice and do the right thing.”

Speaking to UN News, Mr. Shaheed said that his motivation for tackling antisemitism dates back to his formative years: “I have always been struck by how widespread antisemitism is in my own country, where there has never been a Jewish presence. But it’s so widespread everywhere you go”.

“I am very concerned, in my mandate, about rising global intolerance, and I think that the place to start off is the oldest hatred, because if we learn how toxic antisemitism, conspiracy theories, and scapegoating are, then we begin to address all the other issues as well. For me, antisemitism is a particularly pernicious form of hatred”.

Surviving slavery, and the ‘tenacity of the human soul’

Another human rights issue that has persisted over centuries, is slavery. More than half of all countries have yet to criminalize it, and some 40 million people around the world are enslaved, a quarter of them children. 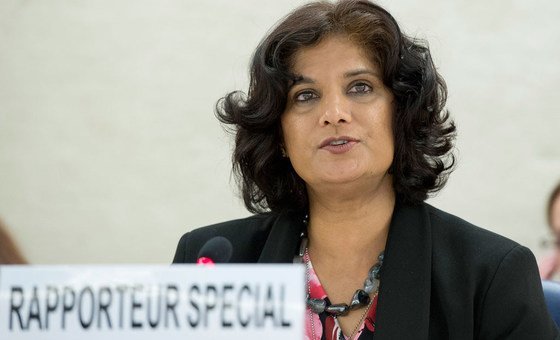 Ms. Bhoola has worked for some twenty years, as a labour and human rights lawyer in South Africa, and has received many awards for her rights and gender equality work.

As she explained to UN News, supporting workers’ rights, and ending their exploitation, has always been close to her heart, and her current role allows her to help some of the world’s most vulnerable:

“My mandate is also focused on the specific impact of slavery on women and children, so it is an opportunity that allows me to make a greater contribution to the rights of workers and to really pursue my commitment of ending the extreme forms of exploitation that we find in the world today.”

As Special Rapporteur, she has an opportunity to engage with governments, civil society organizations, survivors and victims, in several countries, and making recommendations. She has also seen first-hand the devastating impact of contemporary slavery:

I feel that everyone I’ve met, every survivor and victim, has told a story with so much dignity, and they speak so much to the tenacity of the human soul Urmila Bhoola

“The one situation that really had a major impact on me was meeting some of the women in a village in Niger, which was my first country mission. I met a survivor who brought a case at the ECOWAS (Economic Community of West African States) Court of Justice against her government, because she had been sold into slavery by her master. She managed to recover compensation, but also recovered her dignity because the court ruled in her favour”.

So I met her and a number of women who had escaped from slavery:  they had been forced to become ‘fifth wives’, which is when a master and his four wives, literally employ someone, normally a girl, to work as a slave in the household”.

“Some of them had terrible stories: one of them had her eye put out by her master, because she refused to comply with his demands. Their resilience and dignity, despite the experiences that they had gone through, really struck me”.

“I feel that everyone I’ve met, every survivor and victim, has told a story with so much dignity, and they speak so much to the tenacity of the human soul”.