“There is clearly a breakdown in trust between North and South, and between developed and emerging economies. This is no time for finger-pointing. The blame game is a recipe for mutually assured destruction,” António Guterres told journalists at the Sharm el-Sheikh International Conference Centre.

The UN chief urged countries to deliver the kind of meaningful action that people, and the planet, so desperately need.

“The world is watching and has a simple message: stand and deliver,” he underscored. 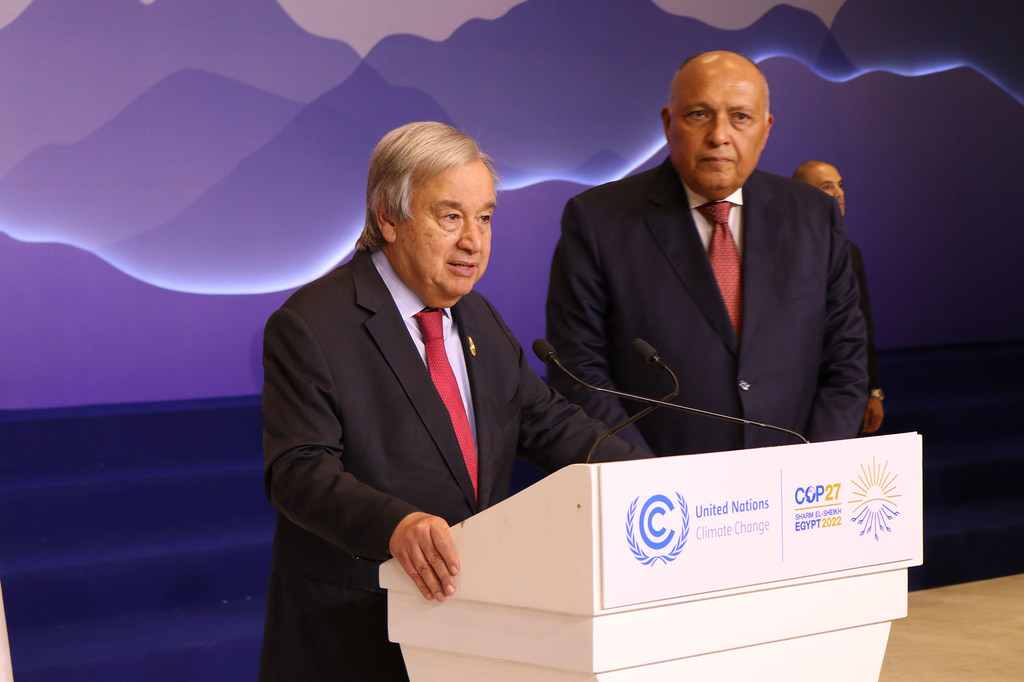 Action on loss and damage

Mr. Guterres reminded world leaders that global emissions are at their highest levels in history, and climate impacts are decimating economies and societies.

“The most effective way to rebuild trust is by finding an ambitious and credible agreement on loss and damage and financial support to developing countries. The time for talking on loss and damage finance is over. We need action,” he stated, urging negotiators to deliver concrete solutions to resolve one of the thorniest issues on the table at this year’s COP, or Conference of Parties, to the UN climate convention.

The UN chief also asked negotiators to send a clear signal that the voices of those on the frontlines of the crisis are being heard, while the world burning and drowning before their eyes.

“Reflect the urgency, scale and enormity of the challenge faced by developing countries. We cannot continue to deny climate justice to those who have contributed least to the climate crisis and are getting hurt the most,” he explained.

For the first time in the history of UN climate conferences, the issue of loss and damage has been included in the official agenda.

The creation of a new financial facility to compensate for the losses suffered by vulnerable countries hit hardest by natural disasters, is a key demand by the negotiating bloc known as the Group of the 77, which represents nearly all developing countries.

Renewables: ‘the exit ramp off the highway to hell’

The Secretary-General also touched on another issue that has troubled climate activists in the past days: keeping up the ambition to curb global warming to 1.5 degrees Celsius.

“The 1.5 target is not simply about keeping a goal alive – it’s about keeping people alive. I see the will to keep to the 1.5 goal – but we must ensure that commitment is evident in the COP27 outcome,” he said, adding that the current fossil fuel companies’ expansion is “hijacking humanity”

Once again, Mr. Guterres made the case for renewables, and a global Climate Solidarity Pact with developed countries taking the lead in reducing emissions.

“A Pact with developed countries taking the lead in reducing emissions. And a Pact to mobilize – together with International Financial Institutions and the private sector – financial and technical support for emerging economies to accelerate their transition to renewable energy,” he said.

Mr. Guterres underscored that renewables are the “exit ramp from the climate hell highway”, referring to one of the most powerful messages from his speech last week at the opening of COP27.

The UN Secretary-General also asked for the delivery of the $100 billion annually in climate finance promised at COP15 in Copenhagen.

He asked the Parties to act in consensus to double their investments in adaptation and reform multilateral development banks and international financial institutions.

“They must provide the support developing countries need to embark on a renewable energy and climate-resilient pathway”, he highlighted.

UN News/Laura Quiñones
With less that 36 hours left in negotiations at COP27, activists demand action on loss and damage.

‘The clock is ticking’

Finally, Mr. Guterres reminded negotiators that the “climate clock is ticking” and that they have a chance to make a difference, so they must act quickly.

“We have agreed solutions in front of us – to respond to loss and damage, to close the emissions gap, and to deliver on finance”, he concluded.

On Thursday morning, a draft of the final decision, or cover text, was published by the COP27 Presidency. However, NGO experts said that the 20-page document is still just a list of options that must be edited down.

“We will never be defeated”

Civil society took over the plenary of #COP27 on Thursday to demand #ClimateAction and #ClimateJustice . https://t.co/PwAD54K4G2

The current text addresses the 1.5 target and refers to science, reiterates the Glasgow Climate Pact call to phase down coal but does not mention oil and gas. It also references the doubling of adaptation finance and welcomes the agenda item on loss and damage, but it doesn’t call for the establishment of a new financial facility.

On Thursday, hundreds of civil society representatives took over the COP27 plenary to demand climate justice, touching on the very action points the Secretary-General mentioned later at his press encounter.

The ceremony started with a blessing from the indigenous peoples of Brazil, reflecting the important role of spirituality as part of climate action.

“We are all connected, humans and non-humans… everything is sacred and what was created can’t be part of a market. Nature is life”, said the group’s chief.

The so-called People’s Plenary, which takes place every year at the UN climate summits, this year featured the representatives of the constituencies of indigenous peoples, women, youth and workers, among others.

One after the other, activists shared their vision and experience regarding climate change, and spoke about the human rights which, they underscored, are being violated by the current crisis.

“Incredible young people from the global North and the global South are standing together in solidarity asking for action. But we need to look for more than hope.  We need those in power to actually listen and implement the solutions,” the leader of the Youth constituency declared.

A march and a sit-in for justice

After meeting at the plenary, all attendants walked out and did a short march at the outdoor area of the Sharm el-Sheikh International Convention Centre that ended with a sit-in, at which they read the COP27 People’s Declaration for Climate Justice.

The document endorsed by the dozens of organizations present, calls for a “system change” to ensure and enable just transitions to 100 per cent peoples-owned decentralised renewable energy systems, the repayment of climate debt by reducing emissions to real zero by 2030 and addressing loss and damage, the phase-out of fossil fuels, and to ensure a safe and enabling environment for civil society.

“I’m here because I’m angry. My communities have already been impacted by an ongoing drought for the past decade. My people have not seen any rain for the past ten years. Their livelihoods are being impacted already,” Ina Maria Shikongo, an indigenous activist from Namibia, told UN News.

Ms. Shikongo said that Namibia is currently one of the driest countries in Southern Africa and yet global leaders are still debating whether they should pay for loss and damage.

“Our governments keep on borrowing funds just to be able to support communities when we are the least responsible for the climate crisis. Namibia is a carbon sink, so that means that the global North, they do owe us climate reparations,” she underscored.

For Ms. Shikongo, the answers to the climate crisis lie with the world’s indigenous communities.

Polish activist Dominika Lasota told UN News that she is at COP27 to promote the end of fossil fuels, which she believes are driving the war in Ukraine.

Ms. Lasota said that community renewable projects should be the main solution to the climate crisis, and also highlighted that indigenous communities, which have been protecting the planet’s ecosystems for centuries, should be heard.

“We desperately need to redirect the money from the death, from fossil fuels and from investments that destroy our lives, and into solutions and into things that protect the light of indigenous peoples, such as loss and damage finance,” she underscored.

“We will never be defeated”

Civil society took over the plenary of #COP27 on Thursday to demand #ClimateAction and #ClimateJustice . https://t.co/PwAD54K4G2