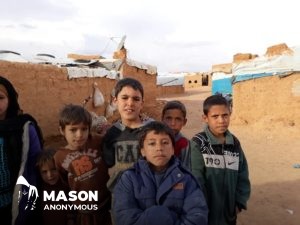 Now in its ninth year, as Syrian Government forces and allies reclaim areas previously held by opposition forces, the conflict has claimed hundreds of thousands of lives and displaced millions.

In Rukban camp, which is near the Jordanian border, UN humanitarians have repeatedly called for greater access since a second convoy last reached the site in February.

Echoing that message in Geneva, Najat Rochdi, Senior Humanitarian Adviser to the UN Special Envoy for Syria, said that more than 12,000 people had left the camp amid worsening conditions linked to shortages of basic services and supplies.

More than 150,000 people have fled northern #Hama and southern #Idlib governorates since 29 April. Protection of civilians remains the main concern. Get the full overview in our Flash Update. https://t.co/EzJklDUyda pic.twitter.com/4cfsnrD3r4

“The UN continues to advocate for a third humanitarian convoy and for food and fuel to continue to arrive to Rukban through commercial routes,” she said, adding that 29,000 remain there “and it will take time. It is simple math,” she added. “If they want to completely leave the camp – those people did not have any humanitarian assistance, any convoy, since February already, and starvation is already starting.”

Turning to the situation in Idlib, where violence has escalated in recent weeks despite a fragile ceasefire agreed last September, the UN official strongly condemned the targeting of civilians in schools and health centres – including some facilities that had moved to supposedly safer areas outside built-up areas after being targeted in previous attacks.

“Aerial bombardments including the reported use of barrel bombs causing severe damage to civilian infrastructures and civil casualties is a practice that goes against every single humanitarian principle,” she said. “Also alarming, is the reported shelling from the de-escalation zone into areas under government control.”

Latest displacement figures indicate that more than 180,000 people have likely fled their homes in Idlib, Ms. Rochdi said, explaining that for many, this was not the first time they had been forced to flee conflict from elsewhere in Syria.

Most had moved further to the north and east, she said, while others had gone to Aleppo.

“People fleeing because of fear and because of bombing is their cruel daily reality,” she said. “But now, if the bombing is continuing where do you want them to flee? They already fled there as the last resort…Where is it that they will be able to go?”

Speaking to journalists after chairing a meeting of the Humanitarian Task Force on Syria in Geneva, Ms. Rochdi reiterated the panel’s call for “an urgent de-escalation” of fighting in Idlib, and for the warring parties to recommit to the ceasefire agreement; in particular Russia and Turkey.

Of the approximately three million people living in Idlib, one million are children. Hundreds of thousands of lives are at risk because of the ongoing fighting, which has left tens of thousands of youngsters out of school and families sheltering under trees, the UN official explained.

“The insecurity there and the continuing airstrikes, is not something that is conducive really, to deliver humanitarian assistance,” she said. “And as you know, some NGOs, about 12, have suspended temporarily their assistance.”