Kicking off the UN Decade on Ecosystem Restoration, he said the planet was rapidly reaching a “point of no return”, cutting down forests, polluting rivers and oceans, and ploughing grasslands “into oblivion”.

"When we respect nature & our planet, we are respecting ourselves."

Ahead of Saturday's #WorldEnvironmentDay, listen to @UNEP chief @andersen_inger talking about the power and importance of individual #ClimateAction on Awake At Night.🎧: https://t.co/q72SPKpcVX pic.twitter.com/9xDeJuFZ1e

“We are ravaging the very ecosystems that underpin our societies”, the UN chief warned in his message for the Day, being marked on Saturday.

Our degradation of the natural world is destroying the very food, water and resources needed to survive, and already undermining the well-being of 3.2 billion people – or 40 per cent of humanity.

But fortunately, the Earth is resilient and “we still have time to reverse the damage we have done”, he added.

By restoring ecosystems, he said that “we can drive a transformation that will contribute to the achievement of all the Sustainable Development Goals (SDGs)”.

“Accomplishing these things will not only safeguard the planet’s resources. It will create millions of new jobs by 2030, generate returns of over $7 trillion dollars every year and help eliminate poverty and hunger.”

The UN chief described the decade of restoration as “a global call to action” that will draw together “political support, scientific research and financial muscle to massively scale up restoration”.

He pointed out that the next 10 years are “our final chance to avert a climate catastrophe, turn back the deadly tide of pollution and end species loss”.

“Everyone can contribute”, said the Secretary-General. “So, let today be the start of a new decade – one in which we finally make peace with nature and secure a better future for all”.

Meanwhile, UN independent human rights experts have called on the UN to formally recognize that living in a safe, healthy and sustainable environment is “indeed a human right”. 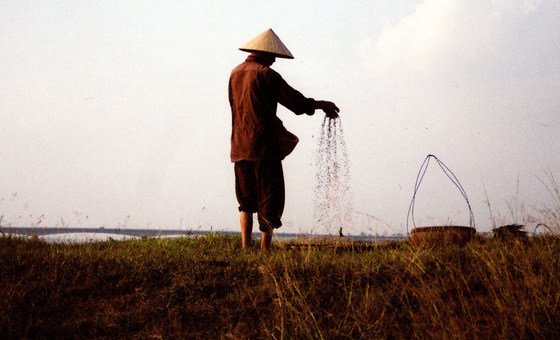 “Of the UN’s 193 members, 156 have written this right into their constitutions, legislation and regional treaties, and it is time for the United Nations to provide leadership by recognising that every human is entitled to live in a clean environment”, they said in a joint statement marking World Environment Day.

“The lives of billions of people on this planet would improve if such a right were adopted, respected, protected and fulfilled”, the UN experts added.

Nearly 50 years after the Stockholm Declaration on the Human Environment, in which Member States declared that people have a fundamental right to “an environment of a quality that permits a life of dignity and well-being,” the time is ripe for concrete action, they said, calling on both the Human Rights Council and the General Assembly to take action.

A surge in emerging diseases that jump from animals to humans, such as COVID-19, along with the climate emergency, pervasive toxic pollution and a dramatic loss of biodiversity, have brought the future of the planet to the top of the international agenda.

The experts said that human rights must be put at the centre of any measures to tackle the environmental crisis.

“Putting human rights at the heart of these actions clarifies what is at stake, catalyses ambitious action, emphasizes prevention, and above all protects the most vulnerable people on our planet”, they stated.  “We could, for example, truly transform our world by shifting from fossil fuels to renewable energy, creating a circular, waste-free economy, and moving from damaging exploitation of ecosystems to living in harmony with nature”.

In a world where the global environmental crisis causes more than nine million premature deaths every year and threatens the health and dignity of billions of people, the experts upheld that “the UN can be a catalyst for ambitious action by recognising that everyone, everywhere, has the right to live in a healthy environment”.

Click here for the names of those who endorsed the statement.

Special Rapporteurs and independent experts are appointed by the Geneva-based UN Human Rights Council to examine and report back on a specific human rights theme or a country situation. The y are not UN staff or paid for their work.