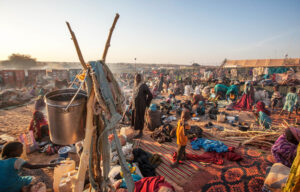 The bloodshed is the latest in a resurgence of violence since the Juba Peace Agreement was signed in October, and UN peacekeepers began to withdraw.

Clashes pitting Arab tribes against non-Arab Massalit communities in Al Geneina Town, West Darfur, began in mid-January, leading to hundreds of casualties, according to the UN.

Statement by the UN Special Representative of the Secretary-General for Sudan @volkerperthes on the Outbreak of Violence in Al Geneina, West Darfurhttps://t.co/HTjijHZBSP @UNITAMS @UN_News_Centre @UNNewsArabic

And around 108,000 already internally displaced people have been pushed out of the Krinding camps, in the capital of the West Darfur state.

To date, the UN said that 56 people have been killed, 58 injured, and thousands displaced from their homes.

There were also reports of attacks on civilians, including women and children, as well as on humanitarian facilities.

To contain the situation, yesterday, the country’s Security and Defence Council declared a State of Emergency.

He noted that they should be seen to act in the interest of peace and to protect all civilians, in full compliance with international human rights standards and without any special treatment based on tribal or ethnic affiliations.

“I appeal to all parties to immediately stop fighting and call on the Government to ensure safety and access to humanitarian organizations providing services to those affected”, said Mr. Perthes. “The government should investigate and hold accountable those responsible for the violence”.

The UN official conveyed to the Prime Minister, government members, and others committed to the Juba Peace Agreement, that the UN and its humanitarian partners are mobilizing additional staff and resources to respond to the displacement and growing humanitarian needs from this latest round of violence.

“The UN is committed to support the Government of Sudan in fulfilling its responsibility to protect civilians and in addressing the underlying causes of this continuing violence”, he said.

The Special Representative expressed his condolences to the families of the victims and wishes for a speedy recovery to those injured.