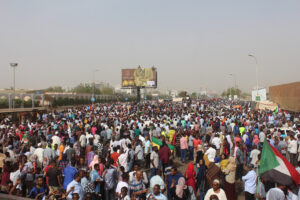 The allegations surfaced after demonstrations in Khartoum on Sunday, where tens of thousands had massed to mark the third anniversary of protests that led to the overthrow of long-time President Omar al-Bashir, in April 2019.

Demonstrators who made for the presidential palace were also protesting against October’s military coup and the political agreement signed later on 21 November, said UN rights office spokesperson Liz Throssell.

🇸🇩 #Sudan: We urge a prompt, independent and thorough investigation into deeply disturbing reports of sexual violence and harassment, death and injury of protesters by security forces during demonstrations in Khartoum on Sunday, 19 December: https://t.co/NnomkhA1LW pic.twitter.com/Q26ZJXwuBx

Speaking in Geneva, she said that security forces are alleged to have raped or gang raped 13 women and girls.

Two protesters also died after being shot and 300 others were injured, she said. Some were hit by live ammunition or tear gas canisters or beaten by security forces, while others suffered breathing difficulties after inhaling tear gas.

“With further protests planned for this weekend and the weeks ahead, it is crucial that security forces guarantee and protect the right to peaceful assembly and act with full respect for international laws and standards regulating the use of force”, Ms. Throssell insisted.

At a scheduled briefing, the UN rights office spokesperson said that OHCHR’s Joint Human Rights Office in Sudan had learned of the 13 allegations of rape or gang rape.

“We have also received allegations of sexual harassment by security forces against women who were trying to flee the area around the presidential palace on Sunday evening,” she said.

Highlighting the “unnecessary or disproportionate use of force, in particular use of live ammunition”, the OHCHR official called for the perpetrators to be identified and prosecuted.

On reported violence and rights violations committed since October’s military coup, which the UN High Commissioner for Human Rights earlier said had betrayed “the courageous and inspiring revolution of 2019”, Ms. Throssell noted that a committee of senior prosecutors had been tasked with an investigation.

But these findings should be made public, “with maximum transparency, with a view to holding to account, including through criminal investigations, those responsible for human rights violations and abuses”, she maintained.

Elsewhere in Sudan, the UN rights office spokesperson pointed to a deadly uptick in intercommunal violence in Darfur and South Kordofan. Since September, this has resulted in at least 250 civilians killed, 197 injured and more than 50,000 displaced.

Earlier this month, the UN refugee agency, UNHCR, said that nearly thousands of Sudanese had fled violence in the Jebel Moon, a locality in West Darfur, one of the five Darfur States. More than 2,000 of them, mostly women and children, had sought refuge in neighbouring Chad.

Sudan has some three million internally displaced people, with more than 80 per cent living in the five Darfur States. In 2021, around 200 violent incidents have been reported in Darfur, causing fresh displacement, according to UNHCR.

“There have been serious protection gaps in Darfur, especially following the reduction of state security forces in key areas in Darfur and long delays in implementation of a National Plan for Civilian Protection,” Ms. Throssell said.

Although the national authorities intend to deploy a 3,000-strong temporary joint protection force later this month, the UN rights office spokesperson said it was crucial that they receive comprehensive training on human rights and international humanitarian law first.

“It is also essential that those responsible for the human rights violations and abuses committed are held accountable, regardless of their affiliation,” she said.

In her last update on the situation in Sudan to the Human Rights Council, UN rights chief Michelle Bachelet condemned the 25 October coup and the arrests that followed as reminiscent of the country’s dark recent past.

“The whereabouts of most of those arrested remains unknown, and they have been held incommunicado, with no access to lawyers or their relatives – enforced disappearances compounding the gravity of their arbitrary arrests,” Ms. Bachelet said, noting how “massive street protests” since the military takeover had been met with excessive use of force by the Sudan Armed Forces, including the use of live ammunition.