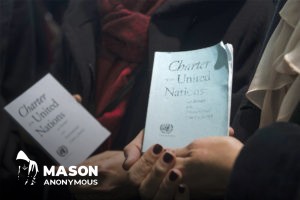 To mark the occasion, a special event took place in the General Assembly Hall at UN Headquarters in New York, on Tuesday, which also served as an opportunity to launch activities commemorating the 75th anniversary of the Organization, which will be celebrated next year.

In her opening address, María Fernanda Espinosa, President of the General Assembly, reminded delegates that the Charter, when it was signed in 1945, carried the “hopes of a world tired by war”. While it is easy to see the Charter as an “idealistic endeavour from another time”, she said, its founders were not dreamers, but hard-headed leaders who “weighed the downside of compromise against the benefits of cooperation and the heavy cost of war.”

Today, she continued, “we can summon the spirit of San Francisco”, which was on show at the signing of the 2030 Agenda for Sustainable Development in 2015, and just a few weeks later, at the signing of the historic Paris Agreement on confronting the global climate crisis. That spirit is needed now “more than ever”, she added.

The General Assembly President was followed by Fabrizio Hochschild Drummond, Assistant Secretary-General for Strategic Coordination and the senior UN official responsible for organizing the commemoration of the UN’s 75th anniversary next year.

The @UN Charter is an exceptional achievement in the annals of history.

74 years since the creation of the UN, the Charter still represents the best path we have for securing global peace, development and human rights.https://t.co/RVKV2UfOaM#CharterDay pic.twitter.com/O0i56eQHbX

Mr. Hochschild referred to a Tweet posted by UN Secretary-General António Guterres on Wednesday morning, declaring that, 74 years on, the Charter “still represents the best path we have for securing global peace, development and human rights.”

The reason it was still necessary to take to Twitter and invoke the Charter, said Mr. Hochschild, was due to a loss of collective memory of the suffering that made global cooperation so compelling to the diplomats who came together on America’s west coast, back in 1945.

Referring to the planned 2020 celebrations of the Charter, Mr. Hochschild said that we are at a “defining moment in the history of our institution, of humanity, and how we deal with this, will impact on the welfare of our children, our grandchildren, and of course on the planet, our only home.”

The Secretary-General, he continued, believes a “forward-looking, inclusive youth-driven global dialogue” is the best way to celebrate the anniversary of the UN, and a shared vision of the future.

The opening remarks by the senior UN officials were followed by a symbolic signing of a copy of the Charter, by representatives of the original?? Member States in the room, as well as non-member States which received a standing invitation to participate as observers, at the birth of the General Assembly.

A display of the text of the Preamble to the Charter in all six official languages, was installed at UN Headquarters on Tuesday, and will remain in place, as an expression of renewed commitment to the Charter ahead of the 75th anniversary.

Only four women were among the 850 international delegates who signed the charter. For this episode of UN Gender Focus, Paulina Greer spoke to three researchers who are helping to uncover women’s contribution to the origins of the UN