When radio host Tashia Kalondo visited a conservancy in Namibia, she didn’t realize just how close she would get to the wildlife. Ms. Kalondo had travelled widely and seen wildlife before, but when the camp staff said they’d have to camouflage the gate to their campsite with shrubs to prevent elephants from coming in overnight, she found it hard to believe. “I laughed because, what a joke, right?” she recalls. “Wrong!” 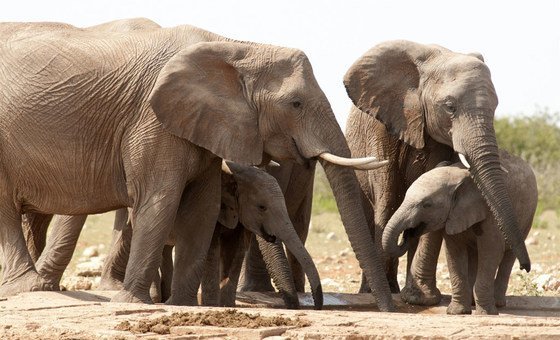 The next morning, she found tracks made by elephants, which, during the night, had loped silently in, just a stone’s throw from where Kalondo was sleeping. “My mind was blown,” she remembers.

Namibia has 86 communal conservancies, which are run by the local residents, and are highly appreciated by tourists. Their desert landscapes of ochre sand, black rock, shining blue skies are stunning, and an array of wildlife species, including black rhinos, lions, cheetahs, hyenas, and zebras, roam the land.

Communal conservancies play an important role in sustainable development. People who live on conservancy land are granted rights to utilize wildlife sustainably, which include the harvesting of meat and the sale of trophy hunting rights, both based upon regulation and quotas. This way they benefit from wildlife management and tourism, and have less incentive to trade illegally in animal parts.

The conservancies protect and even recover wildlife, building back the population of animals lost to poachers. In 2019, poaching in Namibian conservancies decreased by more than 60% over the preceding year, thanks to greater intelligence and law enforcement operations — supported by the UN Development Programme (UNDP) — and tougher sentences and fines.

This success now risks being undermined by COVID-19. Compared to other countries, the health toll of the virus has been relatively low, thanks largely to a ban on international arrivals put in place by the Namibian government in March. However, the impact on the economy, and tourism in particular, has been devastating: Namibia’s Ministry of Tourism is expecting zero tourist arrivals for the entirety of 2020. 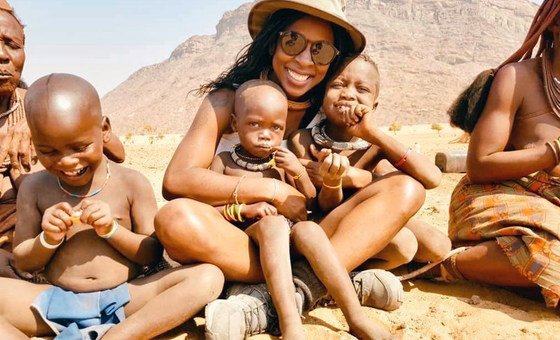 Tashia Kalondo (centre) is a popular radio host in Namibia, by UN Namibia

Tashia Kalondo is from Namibia, where she’s a popular radio personality, but most tourists come from Europe, the US, China, and neighbouring African countries. In 2019, there were 1.7 million foreign visitors — that’s in a country of 2.5 million people. The conservancies alone bring in $3.2 million in income, not to mention $3.5 million in annual staff salaries. That’s a lot of money in a country that falls in the bottom third of the Human Development Index: nearly a third of Namibians are poor.

Due to the pandemic, tens of thousands of conservancy jobs are in jeopardy. With many people more desperate for food and income than before, poaching is expected to increase, yielding valuable products such as elephant tusks, rhino horns, or simply meat for local consumption.

“Namibia is facing three challenges at once,” explains Alka Bhatia, UNDP Namibia Resident Representative. “There’s the pandemic. There’s the economic crisis. And then there’s the threat of increased poaching, which strikes a blow to the tourist industry and the economy.”

In response, UNDP  and the World Health Organization (WHO) are supporting the government by procuring medical supplies. UNDP also collaborated with the United Nations Information Centre (UNIC) in the capital, Windhoek, and WHO on health education initiatives, to slow the spread of the coronavirus

The conservancies are one of the biggest tent poles holding up the national economy. If they fall, then a lot more will collapse around them. Alka Bhatia, Namibia Resident Representative, UNDP

In addition, UNDP partnered with a local online shop to launch an e-commerce platform to help informal traders regain some of their lost income. And the agency made a grant to conservancies to stay afloat, covering their salaries and anti-poaching work. That’s just the latest move in years of support that UNDP has provided to the conservancies, including training and equipment to fight fires, and help with fire and land management policy.

“For the long-term health of the Namibian economy, the communal conservancies must survive,” says Ms. Bhatia. “The conservancies are one of the biggest tent poles holding up the national economy. If they fall, then a lot more will collapse around them.”

It’s not just the economy that will be affected. The loss of natural areas, as well as the poaching and consumption of wildlife, increase the chance that viruses will jump from animals to humans. That means more zoonotic infectious diseases — such as Ebola or HIV/AIDS that pass from animals to humans — which leads to more economic crises, more poverty, more hunger. By protecting flora and fauna, conservancies act as a natural buffer against disease.

“The human-wildlife relationship is an intricate one,” says Ms. Kalondo, reflecting on her conservancy visit. “Besides admiring the wildlife, I spent time with some community members, including a Himba tribe settlement. I saw first-hand people and wildlife living together.” Her experience points to one of the greatest values of the conservancies.

“Conservancies create jobs. They provide jaw-dropping experiences of wildlife,” says Ms. Bhatia. “But they also give us something else. They provide a lesson on how to coexist with the natural world. It’s a lesson we should all be mindful of.”