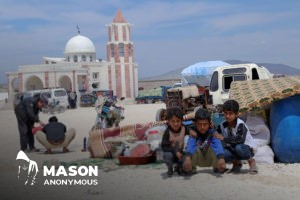 Executive Director Henrietta Fore said in a statement that over the past few days, intensifying violence, had left children “hemmed in” especially in villages in northern Hama and southern Idleb, driving many families from their homes while “others are unable to move to safer areas”.

“Her name is Lulu. She’s a gift from my mom so she’s very important. I love her!” Iman, 13, holds her doll in Za’atari refugee camp.

“We brought her here from Syria… When the war started and there was shooting, I used to hug her to feel safe.”#AChildIsAChild pic.twitter.com/mboGiLk21h

This latest escalation follows months of rising violence in the area, which has reportedly left at least 134 children dead and more than 125,000 displaced in 2019 alone. And with nearly 30 hospitals under attack, the spike in violence has forced some of UNICEF’s healthcare partners to suspend their lifesaving operations.

Moreover, approximately 43,000 children are currently missing school. Final exams in parts of Idlib have been postponed, “affecting the education of 400,000 students”, she continued.

Although UNICEF’s partners are on the ground in the northwest, working to reach children and families with mobile health clinics, vaccines, psychosocial support and sanitation supplies, she said that these “quick fixes” can “go only so far” in mitigating the humanitarian fallout from the “brutal and gratuitous violence”.

“Children bear no responsibility for this war, yet they suffer its carnage and consequences more than anyone”, stressed the UNICEF chief.

Ms. Fore urged parties to the conflict in the northwest and across Syria to “make every effort to protect children and the infrastructure they depend on”, including hospitals and schools.

“Parties and those who have influence over them should also forge a comprehensive and lasting peace that finally brings this war to an end, for the sake of Syria’s children and the very future of the country and the region”, concluded the UNICEF Executive Director.