The words of 29-year Wala Matari from Cameroon may be uncompromising, but they are a heartfelt and honest window into the suffering she has experienced, and the enduring torment of the unspeakable atrocities perpetrated by ruthless terrorists against this mother of six. 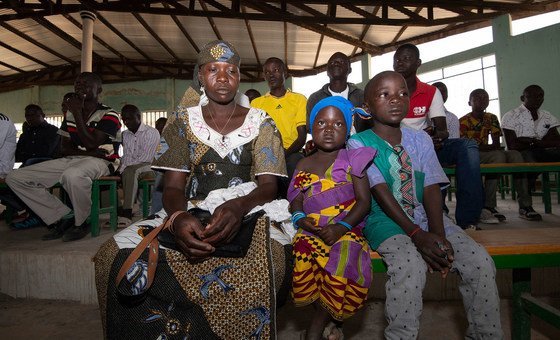 Twenty-nine-year-old Wala Matari, a former terrorist hostage, attends church with her children in the village of Zamai in the Far North region of Cameroon. UN Photo/Eskinder Debebe

Every Sunday, she told UN News in her new home town in the far north of the country, she walks the dusty paths which cross-cross the parched and sparsely-vegetated landscape, to bring her children to church.

Today she has come to St Joseph’s, this airy and high-ceilinged Catholic church in Zamai, to hear a pastor deliver his homily on peace and acceptance to a congregation of perhaps 200 worshippers, many of whom have been subjected to similar horrors.

“I go to church to drown my sorrows, to move on from the bad memories. We sleep better after hearing the word of God. After church, I am happy to be alive,” she told UN News, following the service.

One Wednesday night in September 2014 armed insurgents attacked her previous home in the village of  Zelevet, ransacking and burning down homes and then dragging their occupants into the bush.

They came at night, in the middle of the night, while I was sleeping with my children and my husband; they surrounded our neighbourhood, our house” she said. “They were completely masked, with only slits for their eyes.”

Her brother and his seven sons, her nephews, had their throats cut in front of her, an act of almost unimaginable cruelty; an example of the casual brutality deployed by armed insurgents in the region who terrorize and subjugate civilians in their path.

Hundreds of thousands of people, like Wala Matari, have been displaced and many thousands killed across the region over the past decade or so, as a result of an insurgency which continues to this day.

The reign of terror began in the north-east of Nigeria with the formation of a group which called itself Boko Haram – which roughly translates as Western-style education is a sin – and has since spread to include Cameroon, Niger and Chad.

Wala Matari and her children were taken hostage.  At the time, she  tried to disguise her sons in girl’s clothes, padding their shirts to suggest they had breasts, knowing that boys would probably be recruited into the ranks of the insurgents, or worse, just summarily executed like her nephews.

The boys were discovered and forced to take up arms and fight for the group in Nigeria. Meanwhile, Wala Matari was repeatedly raped over a two-year period, became pregnant on multiple occasions and miscarried each time after being mercilessly beaten.

“I was beyond suffering,” she said, and too scared to attempt to escape after seeing others punished for doing so.

“Some people tried to escape but were captured and later died from their injuries. They would have their ears, breast or a limb amputated, and would be left to die in the bush.”

Ultimately, Wala Matari and her family were helped to escape by people she describes as “men in uniforms”, walking at night and hiding during daylight in caves. “God is great, he never sleeps and thanks to his divine grace I escaped that hell”, she said.

The family’s escape led to Zamai in Cameroon. Originally a village, Zamai has grown into a small town following the arrival of people displaced by terrorist activity.

Some 2,270 people who have fled their homes in other parts of the region live side-by-side in small now semi-permanent shelters made of mud and brick; they’re covered in the white plastic sheeting provided by the UN refugee agency, UNHCR; the telltale marker of the displaced in Cameroon, the Lake Chad region and indeed across Africa. 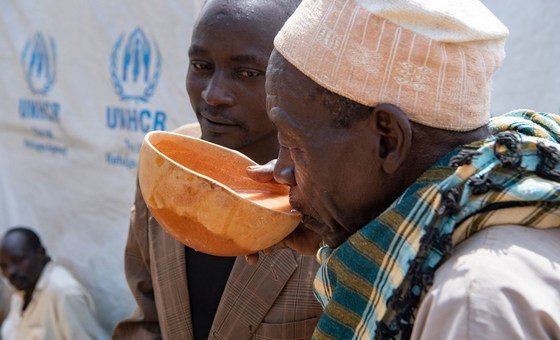 Wala Matari has received support from the UN Development Programme (UNDP) including literacy classes and training in animal husbandry. She has also participated in a cash-for-work programme which enabled her to fund a small, and now thriving, business brewing “bilibili” a local beer made from red millet grain.

On Sunday afternoons she serves it to the men of Zamai who gather at her home to drink from a bowl-shaped container made from the gourd of a calabash tree.

“I am making the millet beer so that I can feed and clothe my children, buy the soap and to take care of my husband who is mentally ill. Before, my children and I we lived in extreme poverty. With my millet beer, I am fighting for my family,” she told UN News.

Wala Matari is rebuilding her life one gourd of bilibili at a time, earning money to support and sustain her family. It is unclear how long they will stay in Zamai and whether she will return to her original village, but while ongoing terrorist activity in the region makes a return impossible, she says that her Christian faith continues to provide her with the strength to face up to past horrors and the uncertainty of the future.