“We need shade against strong sun and wind”, says Nsyamuhaki Joseph. “And places to enjoy arts and culture”. Mr. Joseph, a resident in the Kalobeyei Integrated Settlement in Kenya, was speaking during workshops held for residents of the site, which was set up in 2015 to cope with an influx of refugees from Sudan and other regional countries, into northern Kenya. 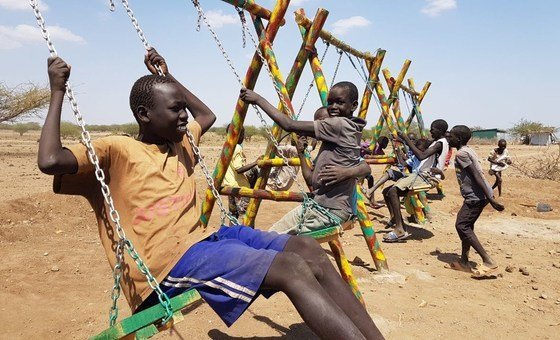 The workshop, held at the end of 2017, was part of a project to bring the refugees and locals closer together, by involving them in the process of creating public spaces, including a playground and a park, that would benefit both communities, using Minecraft.

Minecraft, one of the world’s most popular computer games, has been described as “digital lego”. It allows users to collaborate on models, based on real-life sites using textured cubes. It is also designed to be easy to learn, so that people with little knowledge of computers can quickly grasp the basics and start building.

During the two four-day workshops in Kalobeyei, host and refugee participants developed design skills by using the game and visited the physical sites they planned to improve. They then took turns sharing their ideas, and worked up a plan that included shade structures, solar lights, trees and the first boda boda (motorcycle taxi) station at the settlement.

The community has since seen a marked improvement to their environment: solar lights have been installed in the public spaces, and more than 500 trees have been planted, providing the shade requested by Mr. Joseph and others, and improving the area’s micro-climate.

Design from the bottom up 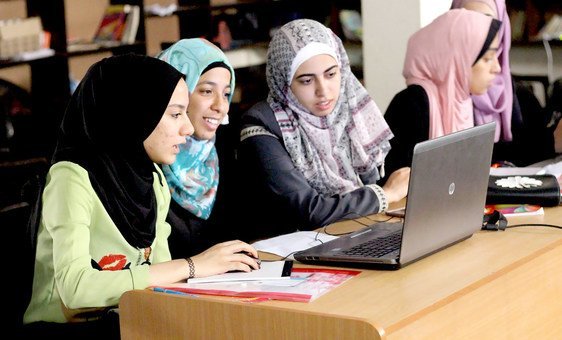 UN-HABITAT | Girls at a Block by Block workshop in Gaza design improvements to their neighbourhood.

The Minecraft initiative is called Block by Block, the name also given to a foundation run by representatives from the UN Human Settlements Programme (UN-Habitat), Mojang (the makers of Minecraft) and Microsoft (which now owns Mojang).

Block by Block began in 2012, as an idea to get community members more involved in the planning of public spaces, by using the game to develop plans that architects and municipal authorities could then turn into reality. It is one of a small number of non-profit organizations whose work directly supports Sustainable Development Goal 11 (making cities inclusive, safe, resilient and sustainable).

Since then, Block by Block, which is funded by the sale of licensed Minecraft merchandise, has taken on a range of community projects in dozens of countries, from Mogadishu to Mexico, and from Haiti to Hanoi. 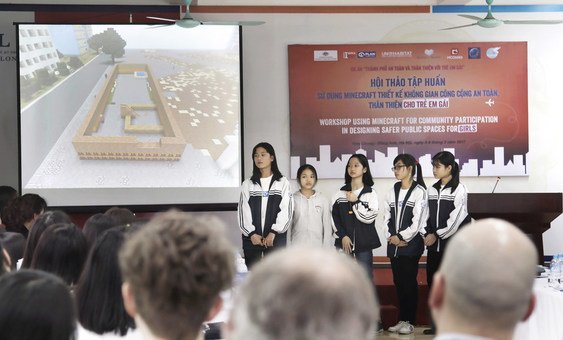 In the Kim Chung neighbourhood of Hanoi, Viet Nam, local girls often travel several miles every day, walking through dangerous, poorly lit areas. In 2017, Block by Block decided to include the girls in a project designed to make their daily commutes more enjoyable, and to improve their safety.

The participants started by taking part in “safety walks” to assess the dangers, and saw that common problems included inadequate lighting, dark corners, and a tunnel under a five-lane highway.

“I hate the tunnel and never like to walk through it by myself, but I have to do it at least twice per day when I go to school”, complained 15-year-old workshop participant Nguyen Ngoc Anh. “We have lots of ideas how to make it nicer so that people will learn to treat it better, and then it can be a safer place for everyone.”

The girls then worked in teams, using Minecraft to reimagine their neighbourhood a safer, more functional place, with unbreakable streetlights, lighted walkways, and improved signage. They also proposed ideas such as women-only coffee shops, shelters and security fences.

The workshop concluded with the girls presenting their proposals to NGOs and Vietnamese politicians, who went away with concrete proposal to improve the Kim Chung neighbourhood. Many of their recommendations have now become reality: three underpasses have been cleaned up, with streetlamps lighting them once it gets dark.

Bridging the gap between citizens and city leaders 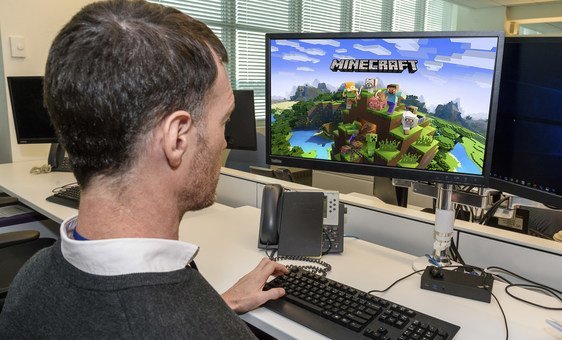 UN Photo/Loey Felipe | UN-Habitat and partners are working with community members to improve the design of public spaces, using the computer game Minecraft. ​​​

As more and more people move to urban areas, it is becoming increasingly important to ensure that communities have the opportunity to participate in the ways that public spaces are planned.

Block by Block is just one example of the ways that digital technology can be used at a grassroots level, and help to bridge the gap between citizens and policymakers, and ensure that urban planners include people’s needs and desires in their decision-making process.

“UN-Habitat supports the engagement of communities in revitalizing their spaces, giving both refugees and host communities new skills”, says Pontus Westerberg, the UN-Habitat project manager for Block by Block. “Minecraft helps to make this a participatory process and gives residents room to visualize the potential of public space within their neighborhoods.”

As digital technology progresses, it is hoped that it will become easier, and more common, for community members to take an active role in the development of public spaces, and make urban planning and design more accessible to all parts of society, regardless of age, gender or ethnicity.