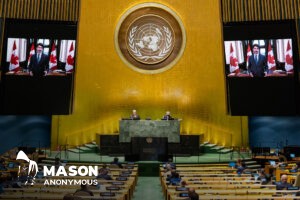 Mr. Trudeau recalled that following war and economic collapse, previous generations established the UN, and international finance organizations in the mid-20th century, such as the International Monetary Fund and the World Bank, thus laying the foundations for a rules-based international order and shared global prosperity.

“Today, all those institutions no longer serve us well enough on what they were designed for – defending multilateralism and international law, protecting human rights and open markets”, he said.

“That is what the crisis of COVID-19 has shown, beyond a shadow of a doubt. That things have to change. And not just on the world stage – but at home, too.”

Mr. Trudeau said governments do not do enough for their vulnerable citizens, such as the elderly and the homeless.  They also are not going far enough to eliminate systemic injustice, be it racism, homophobia or sexism.

“In the difficulties of our citizens, we can see reflected the failure of the institutions of our world”, he said, switching to French.

Although COVID-19 has pushed many countries to the brink, and generated a humanitarian crisis, Mr. Trudeau warned of the greater threat of climate change.

He called for “a new way of thinking” on climate, inequality and health.

“Too often, concerted action is blocked – the needs of our citizens are denied – as a result of gridlock at decision-making bodies”, he charged.

“And why? Because there are few consequences for countries that ignore international rules. For regimes that think might makes right. Few consequences for places where opposition figures are being poisoned while cyber tools and disinformation are being used to destabilize democracies.

“Few consequences when innocent citizens are arbitrarily detained and fundamental freedoms are repressed. When a plane of civilians is shot from the sky. When women’s rights are not treated as human rights. When no one has any rights at all.”

Rise to the challenge

Prime Minister Trudeau urged countries to use the present moment to shift course and work together to achieve a better future for all people.

“We must understand our opportunities and our responsibilities to take real action, together. To protect each other, to support each other”, he said.

“If we meet this moment, if we rise to this challenge, I know that, like our grandparents did 70 years ago, we will lay the foundations of a better world.”