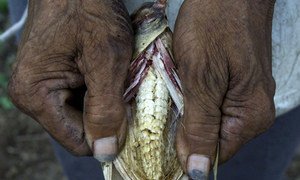 The “unprecedented” impact of climate change is increasingly putting the world’s food security at risk, a new UN study revealed on Thursday.

The special report on climate change and land, from the UN’s Intergovernmental Panel on Climate Change (IPCC), warned that more than 500 million people are living in areas affected by desertification, and are being negatively affected by the climate crisis.

One way to cope with the changing climate, the report suggests, is to improve the way we produce and consume food, noting that almost a third of all food produced, is simply lost or wasted. 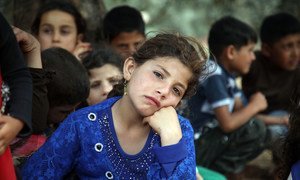 Following the collapse of the latest truce in the Syrian city of Idlib at the start of this week, a senior UN official urged Member States to increase their support for “critical humanitarian needs” in the country’s last opposition-held enclave.

Najat Rochdi, the Senior Humanitarian Adviser to the UN’s Syria Envoy, said in a statement released on Thursday, that “a new wave of violence is again threatening the lives of millions of civilians who live in the Idlib area, more than a million of whom are children”.

“During the lull in the fighting”, said Ms. Rochdi, “many civilians had returned to their homes and are currently in areas where heavy attacks have resumed putting them at great risk”.

The senior UN official added that humanitarian actors are increasingly concerned by statements suggesting a possible military intervention, “which would have severe humanitarian consequences in an area that has already witnessed years of military activity, displacement, droughts and floods”. 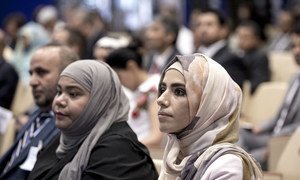 News that Saudi women can now apply for passports and travel without the permission of male guardians, has been welcomed by independent UN human rights experts, who cautioned that women in the country “continue to face numerous restrictions”.

Saudi women will be able to apply for passports. Those over 21 will be allowed to travel independently – without permission from their so-called guardians – by the end of this month.

According to news reports, human rights advocates have welcomed the move, but have also noted that women still require the permission of a male relative to marry, or leave women’s shelters, and some rights activists remain on trial or in detention for campaigning to change the system.

Responding to news that the Indian Governments has put Jammu and Kashmir – a territory disputed by India and Pakistan – under tighter central Government control, the UN secretary-General has called for “maximum restraint”.

Pakistan argues that the removal of the territory’s special status, which has a majority-Muslim population, violates international law, according to news reports.

In a statement issued by his spokesperson, Mr. Guterres said that he had been following the situation in Jammu and Kashmir, “with concern”, adding “the position of the United Nations on this region is governed by the Charter of the United Nations and applicable Security Council resolutions.”

The UN Military Observer Group in India and Pakistan (UNMOGIP) observes and reports on ceasefire violations along and across the Line of Control and the working boundary between the South Asian neighbours in Jammu and Kashmir.

UN Mission in Libya calls for investigation into ‘brutal abduction’ 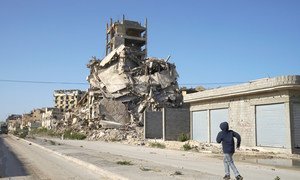 The UN Mission in Libya, UNSMIL, has called for the authorities to thoroughly investigate the “brutal abduction” of national politician Siham Sergawa, from her home in Benghazi.

Ms. Sergawa was taken by a group of armed men, who injured her husband and a relative, on July 17.

The Mission’s statement expressed its deep concern at Ms. Sergawa’s “continued enforced disappearance”, and complained that the reaction of the authorities provided little hope that she would be found.

UNSMIL stressed that silencing the voices of women in decision-making positions will not be tolerated and reiterated its strong commitment to support their full participation in the country’s political life. 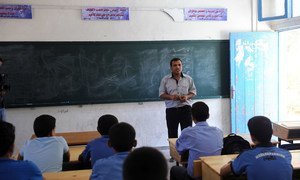 Unless governments in the Middle East and North Africa prioritize peace and stability, the region will fail to achieve the UN’s Sustainable Development Goals, the UN Children’s Fund, UNICEF, has said, launching a report focusing on the goals related to children and young people.

The UN agency stated that, without improved education and meaningful work opportunities, the region – which has the highest youth unemployment rate in the world – faces the “critical risk” of a record increase of five million out-of-school children, and a rise in youth unemployment of more than 10 per cent.

Many young people feel that things are getting worse, says the report, with a deterioration in their quality of life over the last decade, and only half of them have confidence in their own governments.

UNICEF is calling for an urgent boost in expenditure for early childhood care, quality education, gender equality and youth employment, in a bid to reach the Sustainable Development Goals.

Listen to or download our audio News in Brief for 08 August on SoundCloud: