Camilo Andrey Vergara was born in 1989 in a rural area of Antioquia, in western Colombia. Raised among coffee and cocoa plantations, his early life with his parents and siblings was peaceful. But the armed conflict ripped his family apart, when he was still a small child.

“When I was small, armed groups extorted and threatened peasants, and recruited children”, says Mr. Vergara, remembering the dark days of the 1990s, when drug trafficking and violence were rife, particularly in the rural areas of the country.

“One night, when I was nine years old, an armed group broke into our house at two o’clock in the morning. They told my father that one of his children had to leave with them or they would kill us all.”

“They tried to take my 26-year-old brother, Jon Jairo. My father refused, so they shot my brother dead, in front of us. They then tried to take my other brother Carlos Mario, who was 19. He also refused, and they killed him too”.

With shots ringing out in his home, and those of his neighbours, Camilo and his remaining family members fled into the dark night.

Alone, on the streets of Medellin

The next day the young boy found himself alone, and lost. He decided to walk to Medellin, to look for his grandmother. It took him two days. However, once there, he realized that, without a phone number or an address, it would be practically impossible to find her.

With no other options, and too young to be considered for a job, he ended up living on the streets, performing stunts and juggling for loose change. Sometimes he would go for days without food and, at night, he feared for his life. “I was beaten, and threatened with weapons. My greatest fear was being caught and sexually abused. The street is another world”, he summarizes, understandably unwilling to go into too much detail.

Eventually, Mr. Vergara tracked down his grandmother, but his joy at finding her was short-lived: she was living with his uncles, who were selling drugs from the house.

Refusing to get caught up in their criminal activities, he decided not to live with them and, instead, found somewhere else to live, doing what could to survive. In time, he managed to return to school, training as a gymnast, and winning study scholarships and, when he was old enough, was even able to join the police force, raising hopes that he might play a part in bringing justice to a country still beset with violence, and be reunited with his family, whom he not heard from since the killing of his father and brothers.

In both these aims, however, he was unsuccessful: living as a police officer in one of the most violent neighbourhoods of Medellin, he found himself in the crosshairs of gangs who wanted him dead, and was unable to gather any information about the whereabouts of his family. After a year and a half, he left the force, disillusioned, and moved to Betulia to teach gymnastics to young children.

‘A tragedy had separated us and a tragedy brought us together’

In 2015, a deadly mudslide hit Salgar, a municipality 30km away from Betulia. More than eighty people died, dozens of houses disappeared, and hundreds of inhabitants had to flee the area. The event shocked the country, and thousands of volunteers offered to go to Salgar, including Mr. Vergara. 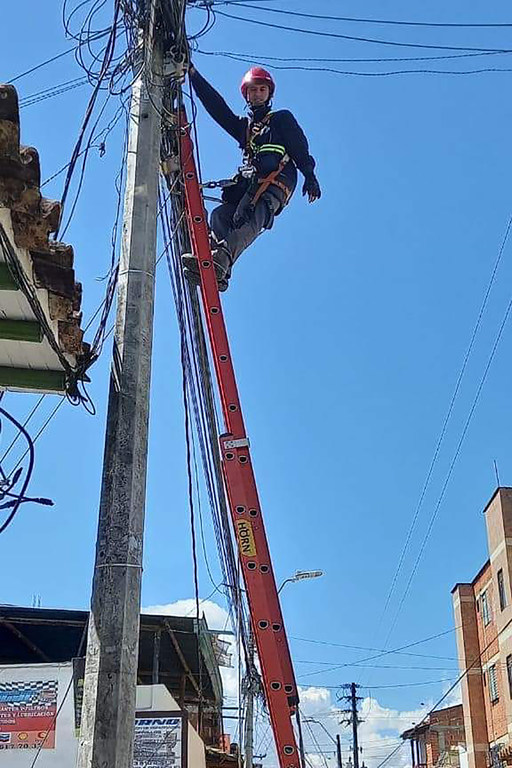 Tending to hungry, frightened families who had lost everything, he saw some familiar faces: his parents, and one remaining sibling, his younger sister. “A tragedy had separated us, and a tragedy brought us together again,” he reflects.

It was the first time he had seen them in 15 years. “It was very hard to hear that they had not looked for me, because they thought that I had either died on the day my brothers were killed, or that the guerrillas had recruited me”.

Although he was excited to be reunited after such a long time, he took on an enormous responsibility: to support the entire family, whose livelihood had been swept away by the mudslide.

With only a basic education he took whatever employment he could, working as a cleaner, a gardener and, at night, a security guard at a commercial centre. The stress of working so many jobs and sleeping for just four to five hours a night meant that he lost 15 kilos in weight, and his health suffered.

Training for the future

Finally, in 2020, Mr. Vergara’s life began to turn around. The National Learning Service of Colombia (SENA) won a tender with the International Labour Organization (ILO) to offer a technical education programme called “Training for the Future”, to help victims of the armed conflict to gain the qualifications needed to enter the technical work environment.

Thanks to the programme, he was able to gain a diploma to work with a company providing internet and telephone services, a job which involved some of the physical, acrobatic skills he had used on the streets as a child.

“That was the opportunity I had been waiting for years”, he says. “After everything that I had experienced, including living on the streets, having to beg, it seemed like a dream”.

As well as providing Mr. Vergara with a vocational education, ‘Training for the Future is providing him with psychosocial and other forms of support. To date, the program has benefited more than 1770 victims of the conflict, in 27 cities throughout the country.

After graduating, in October 2021, Mr. Vergara received a job offer as a technician, where he receives a salary commensurate with his qualifications, with options to grow professionally.

Mr. Vergara says that he wants to continue studying, and hopes to go to University. “I have learned that, in life, material things can be taken away from you, but not knowledge”, he says, adding that, in his view, education is the key to reducing the violence that is still present in Colombia.

“If we want to move forward and have a future as a country, the first thing we have to think about is education. A country without culture or education is a country with no vision, a country that will live by struggle and fighting.”