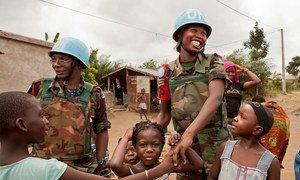 The Women, Peace and Security agenda must continue to be “one of the top priorities of the United Nations”, Secretary-General António Guterres told the Security Council on Tuesday, in an open debate on how best to accelerate change.

He spoke of “the sad fact” that the commitment “reflected around this table is not translating into real change around the world”, lamenting, “it is not coming fast enough or far enough”.

The people of Indian-administered Kashmir continue to be deprived of numerous basic freedoms, the UN High Commissioner for Human Rights said on Tuesday, before urging the Indian authorities “to unlock the situation”.

The appeal over the territory – which both India and Pakistan claim as sovereign – follows months of escalating tensions linked to earlier suicide attacks and the Indian Government’s decision in August to revoke majority-Muslim Kashmir’s special status, which for decades had allowed it partial autonomy.

More than 300,000 Syrians have received emergency food aid from the UN in the last three weeks, in response to the recent military operations in the north-east of the country.

According to the World Food Programme, WFP, this number includes people fleeing hostilities and families providing shelter to the displaced.

In addition, the agency is scaling up regular food assistance to nearly 600,000 people in Hasakeh and Raqqa governorates, including many who were uprooted by the Turkish incursion in Kurdish-controlled areas.

Highlighting the ongoing humanitarian emergency elsewhere in the wartorn country, the UN agency noted that some 400,000 people have sought shelter in camps in northern Idlib in recent months. 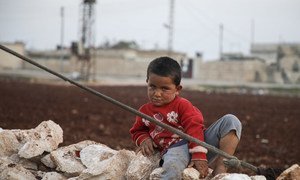 On the eve of its launch,  welcomed the “unique opportunity” provided by the Syrian-led Constitutional Committee, which meets for the first time on Wednesday.

Syrian Government and opposition will sit together at the UN in Geneva to discuss a political path out of the grinding Syrian conflict, through a new constitution.

“I am pleased that women’s representation on the committee is very near 30 per cent – the UN has been steadfast to secure that minimum threshold”, Mr. Guterres said in a statement.

With the UN facilitating, Mr. Guterres fully expects that in line with resolution 2254 of 2015, the parties will work in good faith toward a solution that “meets the legitimate aspirations of all Syrians and is based on a strong commitment to the country’s sovereignty, independence, unity and territorial integrity”.

“The Constitutional Committee’s launch and work must be accompanied by concrete actions to build trust and confidence”, he argued, adding that its meaningful engagement, accompanied by a cessation of hostilities across the country, “will provide my Special Envoy with an environment he requires to effectively discharge his mandate to facilitate a broader political process”.

International actors, aid agencies and governments reportedly pledged $133 million on Tuesday to assist desperate Venezuelans in the throes of a deepening economic and political crisis.

Under President Nicolás Maduro, Venezuela has witnessed a mass exodus that led the oil-rich country into a recession in 2014, prompted record-breaking inflation and dried up food resources, as well as health and other basic services.

At the European Union-led solidarity conference in Brussels, a “strong message of support” was relayed to those who fled Venezuela – now estimated at 4.5 million – as well as the countries and communities in Latin America and the Caribbean hosting them.

With 120 delegations in attendance, the EU and its UN partners also reviewed host countries’ best practices and achievements and rallied further international support. 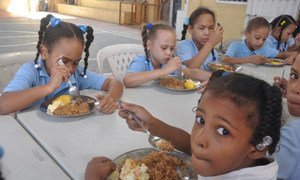 Researchers in El Salvador have found that undernutrition and obesity cost the country 10 per cent of its economic output.

In the first of a series of studies into countries in the region to highlight the cost of poor nutrition, the World Food Programme and partners said that in 2017, this “double burden” amounted to $2.5 billion.

Most of this came from lost productivity, while one-third was linked to extra healthcare costs, the agency said, highlighting that that many families often experience malnutrition and obesity at the same time.

According to the study, one-in-six children in the central American country are chronically undernourished and six in 10 adults are overweight or obese.

Listen to or download our audio News in Brief for 29 October on SoundCloud: