The first resolution, put forward by Ukraine and nearly 100 Member States, Humanitarian consequences of the aggression against Ukraine, calls out Russia’s assault on Ukraine for creating the “dire” humanitarian situation, pushes for a humanitarian corridor, and demands that fighting stops and troops are withdrawn.

Supporters of that draft, hope to build on the resolution that deplored Russia’s “aggression against Ukraine,” which was adopted on 2 March by 141 votes in favour, while five countries – Russia, Belarus, Eritrea, the Democratic People’s Republic of Korea and Syria – voted against. A total of 35 countries, including China, abstained.

The @UN General Assembly has resumed today its 11th Emergency Special Session on the situation resulting from #Russia's invasion of #Ukraine, as decided via Security Council resolution 2623 (2022).

At the same time South Africa has proposed a rival draft text for consideration on Wednesday, entitled Humanitarian situation emanating out of the conflict in Ukraine that makes no reference in its text, to Russia.

Speaking in the Assembly Hall, Ukraine’s Ambassador, Sergiy Kyslytsya, criticized what he called Russia’s “unprovoked and unjustified war” that has “split into two parts” the lives of millions of his compatriots.

He painted a grim picture of people starving, cities razed and neighbouring countries, which are providing relief, stretched to their limits.

“In a nutshell – it has already reached the level of humanitarian disaster,” he said.

Noting that “eight dozen countries have already cosponsored” the draft resolution put forward by his country, he said that nations voting in favour would send “a powerful message” towards “a breakthrough in humanitarian action on the ground.”

Mr. Kyslytsya appealed for support “to prevent a spillover effect for the entire world.”

Ambassador Olof Skoog, Head of the 27-member European Union (EU) delegation – which includes most of the frontline countries taking in millions of Ukrainian refugees – said it was “heart-breaking to see yet another humanitarian catastrophe unfolding before our eyes,” in addition to those in Afghanistan, Syria, Yemen, Ethiopia, Sudan, and other parts of the world.

“Instead of joining international efforts to heal existing wounds, Russia is opening new ones”, he stated.

Calling it “the fastest growing refugee crisis in Europe since World War Two,” Mr. Skoog informed the Assembly that EU States have kept their borders open for everyone fleeing the war, “regardless of nationality, ethnicity, religion or race.”

Meanwhile, beyond Europe, the conflict is putting millions at risk of food insecurity as many countries import at least half their wheat from Russia or Ukraine.

“Russia must stop this war and end this unnecessary suffering,” he said, reiterating that Moscow cease military action and “withdraw all forces from the entire territory of Ukraine, immediately and unconditionally.”

Polish Ambassador Joanna Skoczek reminded that the humanitarian consequences are not limited to Ukrainians in their home country.

Noting that 2.2 million of them have now fled to Poland, she described a “constant inflow” of “severely traumatized” people seeking safety in her country.

“We have registered already 170 nationalities on our border. The consequences of Russia’s invasion on Ukraine are being felt in almost every country around the globe. It affects Ukraine, it affects Europe, it affects us all,” Ms. Skoczek spelled out. 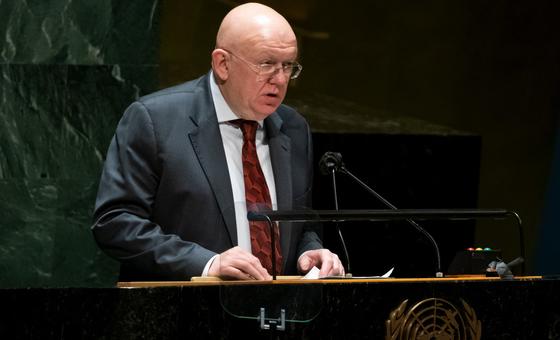 Russian Ambassadsor Vasily Nebenzya said that the Ukrainian text painted “a false, one-dimensional picture” of what is happening, ignoring the causes of Ukraine’s crisis and the West’s role in using the country as a pawn “in a geopolitical game against Russia.”

He called on “all right-minded countries” to support instead, the draft proposed by South Africa, which contains, he said, no political elements.

Supporting that text would not only “signal to civilians in Ukraine that the UN is aware of their difficult situation and is trying to help them”, but also offers an “opportunity to take a stance on the unprecedented economic and political pressure” that many countries are facing, due to Western pressure.

US Ambassador Linda Thomas-Greenfield made clear that the United States could not support a text that makes no reference to Russia’s singular responsibility, in creating Ukraine’s humanitarian crisis.

She also maintained that Moscow was trying to undermine UN humanitarian action by backing competing resolutions, both in the Assembly and the Security Council.

“This war did not appear out of thin air,” she told the Ambassadors, describing the humanitarian resolution put forward by dozens of countries, as “an important opportunity to demonstrate our unity against the brutality of this conflict – and our commitment to holding the perpetrators accountable”. 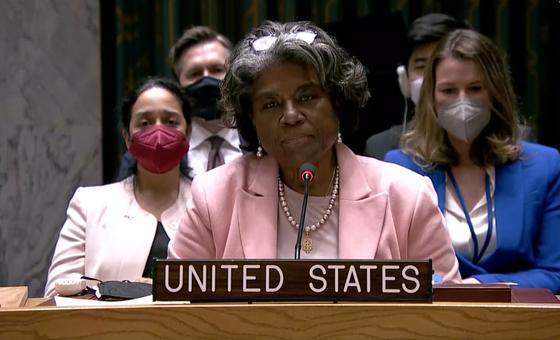 Meeting in the early evening New York time, the Security Council failed to pass a resolution tabled by Russia that would have demanded civilian protection and called for unhindered aid access in Ukraine, as several delegates denounced the move as an attempt by Moscow to justify its aggression against its neighbour.

The draft – which would have needed nine votes in favour and no veto to pass – was the third text on Ukraine to be voted upon by the Security Council since 24 February. (See Press Releases SC/14808 and SC/14809).  Belarus, the DPRK (commonly known as North Korea) and Syria, joined Russia in submitting the text to the Council.

Under its terms, the Council would have demanded that civilians are fully protected, that all parties ensure respect for, and protection of, all medical personnel and humanitarian personnel exclusively engaged in their medical duties, that they respect international law in connection with objects indispensable to the survival of the civilian population, and allow safe and unhindered passage to destinations outside of Ukraine, including for foreign nationals, without discrimination.

After the vote, the Russia’s delegate said the measure exposed all those for whom politicization of the humanitarian dossier is more important that delivering aid to vulnerable people.

The absence of a resolution will only complicate the lives of humanitarians on the ground, he argued, and allow Kyiv to ignore calls for a ceasefire.  “Kyiv will continue to use civilians as human shields and to deploy heavy weaponry near hospitals and kindergartens,” he claimed.

In response, several delegates denounced the move as an attempt to hide a brutal campaign of aggression post-invasion, with the US representative calling it “unconscionable” that the Russian Federation would submit a draft requesting the international community to resolve a humanitarian crisis that it alone created.  “To state the obvious, Russia does not care about the deteriorating humanitarian conditions and the millions of lives and dreams the war has shattered,” she said.