During its 11th Emergency Special Session, 193 Member States adopted a resolution – drafted by Ukraine and 90 co-sponsors entitled Humanitarian consequences of the aggression against Ukraine – with 140 votes in favour, five against – Russia, Syria, The Democratic People’s Republic of Korea (more commonly known as North Korea), Eritrea and Belarus – and 38 others abstaining.

At the end of a second morning of deliberations on competing draft resolutions addressing Ukraine’s humanitarian crisis, 67 States voted not to take action and vote on a second text penned by South Africa, Humanitarian situation emanating out of the conflict in Ukraine, which made no reference to Russia or its role originating the conflict.

Despite that, 50 countries gathered in the General Assembly Hall, did favour moving to a vote on the Russian-backed South African draft, and 36 abstained, but the resolution did not garner enough support to proceed to a full vote.

Speaking before the vote, South African Ambassador Mathu Joyini explained that despite the success of the Ukraine-sponsored draft, her country it put forward its draft with the focus that the humanitarian situation be the immediate priority.

While neither the context that gave rise to the crisis nor international law should be ignored, they should not divert our focus from what we should be doing, namely, “working as a global community to end the war”.

Ukrainian Ambassador Sergiy Kyslytsya spoke passionately against the South African draft, as having “inconsistent thoughts, beliefs, attitudes, or course of actions,” which he maintained, only bolstered a commonly-held sceptical view of “how the General Assembly is already perceived by the peoples of the world.”

In a forceful speech, he said Ukraine had had nothing to do with the text, written without any cross-regional consultations, and “promoted unliterally by one country.”

Mr. Kyslytsya made the analogy of a “child dying in your arms and instead of administering to him the proper medicine…you opt for a placebo.”

“Will you opt for it? Will you leave the dying child with no chance whatsoever? Just because…[it] was so easy to get and to swallow?”
The Ukrainian Ambassador described the failed resolution as like “fresh paint on the mouldy rotten structure of the Assembly, where the paint isn’t actually paint but the blood of Ukrainian children, women and defenders.

“Let’s spare the Assembly from this shame”, he said. “Let’s prove that the Assembly is still a solid structure and we are the United Nations that have been wise enough to avert imminent disaster”, urging all delegations to reject South Africa’s proposal. 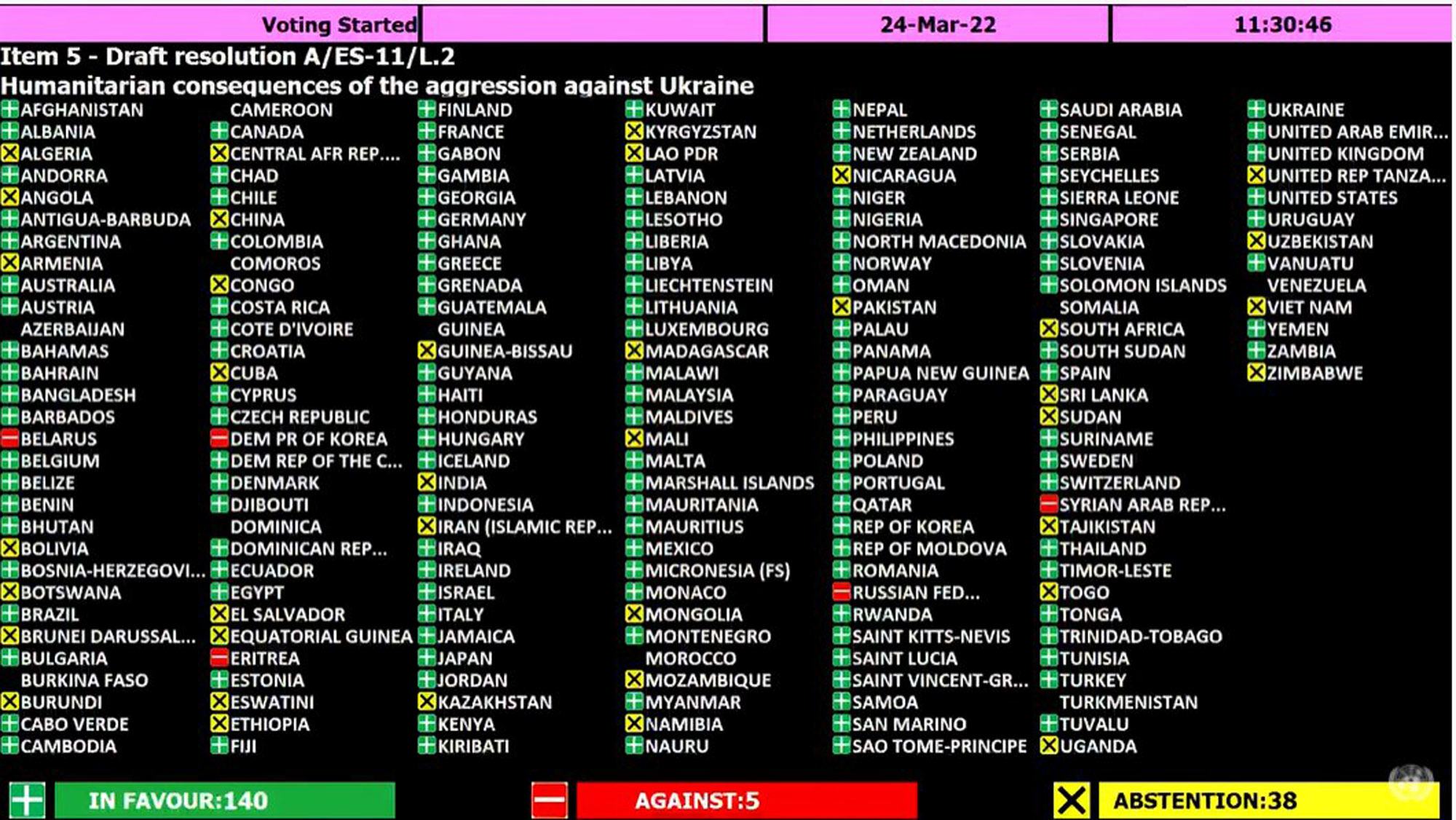 UN Web TV
Tally of General Assembly vote adopting the resolution on “Humanitarian consequences of the aggression against Ukraine.”