The development follows an initial attempt to evacuate civilians from the southern port city at the beginning of March, when a resumption in hostilities ultimately dashed hopes of safe passage for those wanting to leave.

From the breadbasket of the world, to bread lines.

WFP has so far reached one million people inside #Ukraine and is quickly scaling up, but humanitarian access remains critical, @WFPChief urges at #UNSC👇 pic.twitter.com/T8g4HSUYoT

“We remain hopeful, we are in action, moving towards Mariupol, that is obviously a good thing; but it is not yet clear that this will happen today,” said Ewan Watson, spokesperson for the International Committee of the Red Cross (ICRC).

Just a few hours after expressing guarded optimism that the evacuation would take place, ICRC issued a press release, saying that it’s attempt on Friday had failed.

ICRC said that it would make another attempt to access Mariupol, on Saturday.

“If and when it does happen, the ICRC’s role as a mutual intermediary will be to lead the convoy out from Mariupol to another city in Ukraine. We are unable to confirm which city at the moment, as this is something the parties must agree to.”

It had been hoped that some 50 buses would be able to roll out of Mariupol, accompanied by other civilian and ICRC vehicles, providing a “humanitarian marker on this movement of people…giving the convoy additional protection”, the ICRC spokesperson told journalists in Geneva.

“There is no plan B here, we have been working for weeks and telling the media about our efforts to get into Mariupol with aid and to allow the safe passage of civilians out of the city.

“Time is running out for the people of Mariupol.”

Worsening ‘by the hour’

Across Ukraine, humanitarian needs continue to worsen and spread “by the hour”, the UN World Food Programme (WFP) warned.

The agency has delivered life-saving food assistance, including ready-to-eat food, bread and cash assistance, to one million people affected by the war. “People are stressed and they are running out of options,” said WFP spokesperson Tomson Phiri. “Our plan … is to support more and more people, we want to reach at least three million people in the coming weeks and months”, he added.

© UNICEF/Evgeniy Maloletka
A man holds a dog as he walks past a damaged house following shelling in Mariupol, in southeastern Ukraine.

The WFP has already prepositioned close to 40,000 tonnes of food, wheat flour and food rations in Ukraine and neighbouring countries for distribution.

Outside Ukraine, the agency plans to support 300,000 refugees and asylum seekers who have sought shelter in neighbouring countries, some of the 4.1 million who have fled fighting, according to latest UN Refugee Agency data. 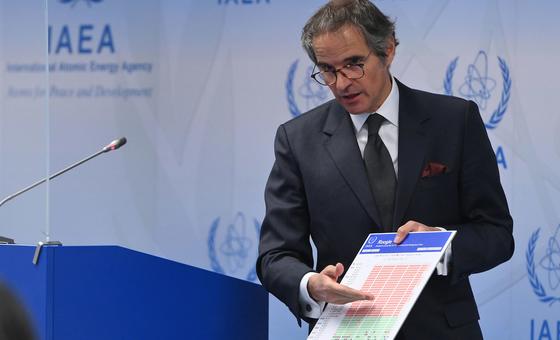 This followed his detailed discussions earlier in the week with senior Ukrainian government officials at the South Ukraine Nuclear Power Plant (NPP) on the “concrete steps that need to be taken to deliver urgent technical assistance for nuclear safety and security in Ukraine”.

Ukraine has informed the IAEA that all Russian forces have left the Chernobyl NPP, and this was confirmed by the Russian officials on Friday.

Director General Grossi said that he intends to personally head up an IAEA assistance and support mission to the Chernobyl plant “as soon as possible”.

It will be the first in a series of such nuclear safety and security missions to Ukraine, IAEA added.

The IAEA has still not been able to confirm reports of Russian forces receiving high doses of radiation while reportedly digging trenches inside the Chernobyl Exclusion Zone.

Out of the country’s 15 operational reactors at four sites, Ukrainian authorities said eight were operating, including two at the Russian-controlled Zaporizhzhya NPP, three at Rivne, one at Khmelnytskyy, and two at South Ukraine. The other reactors are shut down for regular maintenance (including Unit 2 at Rivne which shut down recently), it added.

Despite the continuing violence which has included shelling and street fighting, “WFP has delivered food to vulnerable families in the encircled cities of Kharkiv and Sumy, through two interagency humanitarian convoys that have reached the conflict-hit areas”, Mr. Phiri said.

“One of the biggest challenges we face here is that there are not that many humanitarian partners who are able to work in besieged places.”

In Kharkiv, WFP has also distributed 330,000 loaves of freshly baked bread and it is expanding this bakery initiative to other cities, with the aim of delivering another 990,000 loaves in the coming weeks.

WFP has also delivered stocks of rapid-response food packages in Dnipro and Kirovohrad in central Ukraine, and in Vinnytsia in the centre-western region, for inter-agency crossline convoys and for use by WFP partners.

In areas indirectly affected by the war and where food is available and retail shops are operating normally, WFP has started providing cash or vouchers as a means of support, Mr Phiri explained.

The UN relief chief, and Special Envoy for attempting to broker a humanitarian truce in Ukraine, Martin Griffiths, is due to fly to Moscow on Sunday, UN Secretary-General António Guterres said on Friday.

Mr. Guterres said the Humanitarian Affairs chief would then move on the Ukrainian capital. The UN chief told reporters at UN Headquarters in New York that he was not giving up on the possibility of “stopping the fighting in Yemen, in Ukraine and everywhere else in the world.”