Six weeks since Russia invaded its neighbour, the UN Children’s Fund, UNICEF, said that imports have been disrupted to the Middle East and North Africa – where more than 90 per cent of food comes from abroad.

Six weeks into the war in #Ukraine, the fragile nutritional status of children in the Middle East and North Africa is expected to worsen.

Prices have also risen for essentials, including wheat, cooking oil and fuel and if this situation continues, “it will severely impact children, especially in Egypt, Lebanon, Libya, Sudan, Syria and Yemen”, UNICEF said.

Too poor to pay

Adele Khodr, who’s UNICEF’s Regional Director for the Middle East and North Africa, warned of “unprecedented hikes in food prices” which families were unable to pay because of “ongoing conflicts, political instability, the COVID-19 pandemic and the war in Ukraine”.

Because of these multiple problems, “the number of malnourished children is likely to drastically increase,” Ms. Khodr said, in a call to aid partners “to consolidate efforts to urgently deliver and scale up prevention, early detection and treatment of malnutrition to address the needs of millions of children and women, especially in countries most impacted by crises. This is critical to prevent a massive malnutrition crisis for children in the region.”

UNICEF works with partners to deliver and scale-up life-saving treatment services for children with severe wasting, in conjunction with early detection of wasting in children under five years old. Together with partners, UNICEF also delivers preventive nutrition services, including micronutrient supplements and growth monitoring, along with counselling and support on breastfeeding and age-appropriate complementary feeding.

“We stand ready to facilitate the revamping of the nutrition response in the region to further strengthen links with agriculture, social protection, education and water and sanitation sectors to reach more children in need,” said Ms. Khodr

According to UNICEF, less than four in 10 young children in Middle East and North Africa, get the diets they need for grow and develop properly.

The region is already home to high rates of undernutrition and micronutrient deficiencies, meaning that nearly one in five children is stunted, and around the same number suffer from wasting – or rapid weight loss – linked to lack of food. 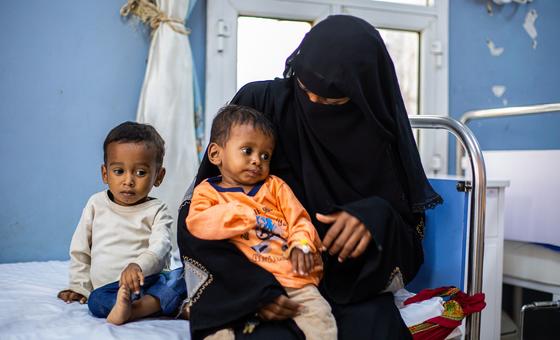 Alarming as this data is, the situation is even worse in countries in the Middle East and North Africa that have been most impacted by the Ukraine war.

In Yemen, 45 per cent of children are stunted and over 86 per cent have anaemia, whose most common causes include nutritional deficiencies, particularly in iron, although a lack of folate, vitamins B12 and A, are also important causes.

UNICEF also warned that in Sudan, 13.6 per cent of children suffer from wasting, 36.4 per cent are stunted and nearly half have anaemia.

In Lebanon, 94 per cent of young children do not receive the diets they need, while over 40 per cent of women and children under the age of five have anaemia;

In Syria – where the price of the average food basket nearly doubled in 2021 – only one in four young children gets a sufficiently healthy diet.