The study by UN Women and the international humanitarian organization CARE, is based on surveys and interviews with people in 19 regions in Ukraine, conducted between 2 and 6 April.

After more than two months of war in #Ukraine, women & minorities are facing immense hardship when it comes to health, safety & access to food due to the crisis.

Women are increasingly becoming heads of households and leaders in their communities as men are conscripted into the fighting, now in its third month.

However, women remain largely excluded from formal decision-making processes related to humanitarian efforts, peace-making, and other areas that directly impact their lives.

“It’s critical that the humanitarian response in Ukraine takes into account and addresses the different needs of women and girls, men and boys, including those that are furthest left behind,” said Sima Bahous, Executive Director at UN Women.

The Rapid Gender Analysis found the war’s impacts are particularly disproportionate for internally displaced people and marginalized groups, such as female-headed households, the Roma community, people with disabilities, and persons who are lesbian, gay, bisexual, trans, queer, intersex or asexual (LGBTQIA+).

Many Roma reported experiencing severe discrimination, both in their daily struggle and in access to humanitarian aid.

Gender roles are also changing. While many men have become unemployed or have been called up to serve in the armed forces, women have taken on new roles and multiple jobs to make up for lost household income.

Women’s unpaid care burden has increased significantly, due to the Russian invasion, with schools closed, as well as high demand for volunteer work, and the absence of men at the front.

Women and girls also highlighted poor access to healthcare services, especially for survivors of gender-based violence (GBV), and pregnant, expecting, and new mothers. They also spoke of rising fears of GBV, and lack of food, especially for those in heavy conflict areas.

Many respondents mentioned challenges and barriers they face in accessing humanitarian aid and services, and around 50 per cent of both women and men indicated that mental health was a main area of life impacted by the war.

The report contains several recommendations for governments, the international community, and others, such as prioritizing women and young people in leadership roles, and share decision-making responsibilities equally.

Priority also should be given to sexual and reproductive health, and to maternal, newborn, and child healthcare, including the clinical care of sexual assault survivors.

The UN Children’s Fund (UNICEF) continues to highlight how the war is having a dramatic impact on the lives and futures of Ukraine’s children.

“The start of the academic year in Ukraine was one of hope and promise for children following COVID-19 disruptions,” said Murat Sahin, the agency’s Representative to Ukraine.

“Instead, hundreds of children have been killed, and the school year ends amid the closure of classrooms due to war and the decimation of educational facilities.”

Since Russia’s invasion, hundreds of schools across the country are reported to have been hit due to use of heavy artillery, airstrikes, and other explosive weapons. Others are being used as information centres, shelters, supply hubs, or for military purposes.

At least one in six UNICEF-supported schools in the east of the country have been damaged or destroyed, including the only “Safe School” in Mariupol.

The “Safe Schools” programme was established with the education ministry, primarily in response to attacks on kindergartens and schools in the Donbas region, where armed conflict has simmered since Russian-backed separatists took charge in some areas in 2014. 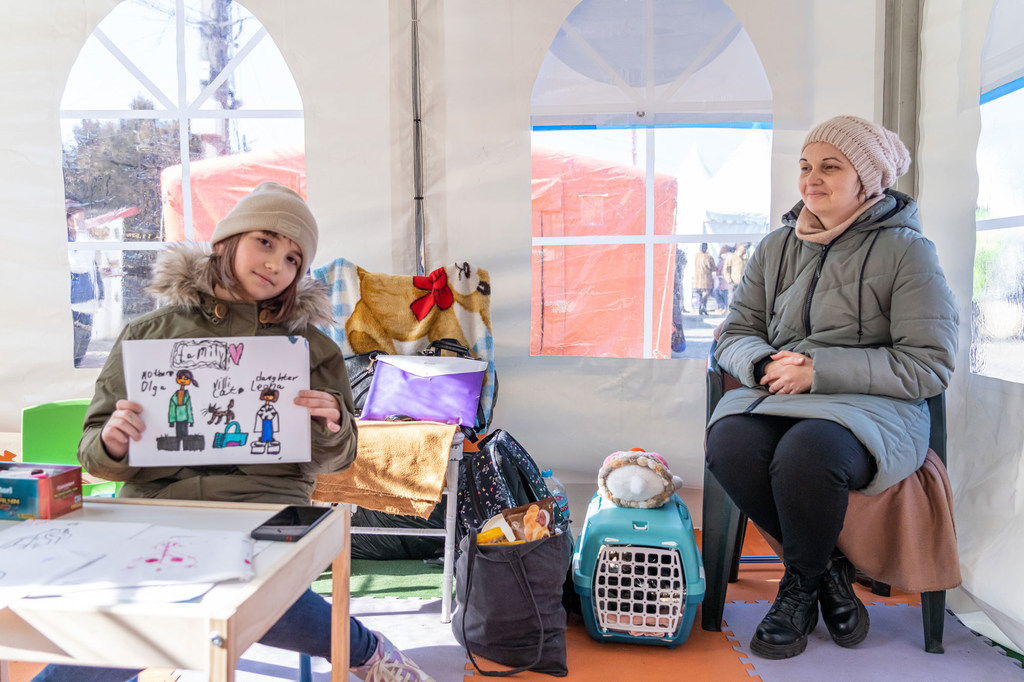 © UNICEF/Adrian Holerga
A nine-year-old Ukrainian girl holds a drawing of her family as she sits in a learning hub with her mother and cat (in blue basket) in Romania.

A safe space for children

UNICEF said being in classrooms was critical for children affected by crisis, as it provides a safe space and a semblance of normality, and also ensures that they do not miss out on learning.

“Ensuring access to education can be the difference between a sense of hope or despair for millions of children,” Mr. Sahin added. “This is crucial for their future and that of all Ukraine.”

Amid the conflict, UNICEF and partners are working to provide as many children as possible with safe and appropriate learning opportunities.

An online education programme for grades 5-11, developed during the COVID-19 pandemic, continues to reach more than 80,000 students displaced in Ukraine.

In the northeastern city of Kharkiv, children have been forced to seek shelter and safety in metro stations. UNICEF-supported volunteers have set up spaces in these locations where teachers, psychologists and sports instructors play and engage children on a regular basis.

Other initiatives include an ongoing digital campaign to educate children about explosive ordnance risk, which has reached eight million users online, while a new online kindergarten platform regularly receives hundreds of thousands of views.

Millions of youngsters have also fled Ukraine for other countries. UNICEF is supporting governments and municipalities to include these children in their national school systems, along with alternative education pathways such as digital learning.