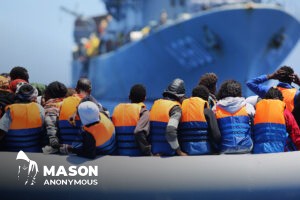 The International Organization for Migration (IOM) and the UN refugee agency, UNHCR,  also underlined the need  for regional agreement on safe disembarkation amid the COVID-19 pandemic and reduced search and rescue capacity.

“The humanitarian imperative of saving lives should not be penalized or stigmatized, especially in the absence of dedicated state-led efforts,” they said in a joint statement.

IOM and UNHCR are calling for the immediate disembarkation of more than 400 rescued migrants and refugees in the Central Mediterranean.

The lack of agreement on a disembarkation mechanism is not an excuse to deny vulnerable people a port of safety: https://t.co/rKUkp4FcXD pic.twitter.com/XNN8nUt8kp

The agencies reported that some 200 refugees and migrants were in urgent need of transfer and disembarkation from the Louise Michel, a search and rescue vessel operated by a German non-governmental organization (NGO) and funded by the reclusive British artist Banksy.

The boat had assisted in a rescue early on Saturday and was overcrowded.  “Any delays could jeopardize the safety of all people onboard, including its crew members,” the agencies warned.

Following calls for assistance, 49 people were later evacuated by the Italian coastguard, according to media reports.

Meanwhile, some 27 people who had departed from Libya have been aboard a commercial vessel since being rescued more than three weeks ago.  Those on the Maersk Etienne include a pregnant woman and children.

Describing the situation as “unacceptable”, the UN agencies stressed that a commercial tanker “cannot be considered a suitable place to keep people in need of humanitarian assistance or those who may need international protection”, adding that “appropriate COVID-19 prevention measures can be implemented once they reach dry land.”

A further 200 migrants and refugees are on board another NGO rescue vessel, the Sea Watch 4.

Both IOM and UNHCR have long called for regional agreement on a  mechanism for disembarkation of people rescued at sea.

“The lack of agreement…is not an excuse to deny vulnerable people a port of safety and the assistance they need, as required under international law,” they said, calling for stalled talks to be resumed and for other European Union (EU) states to step up support to Mediterranean countries on the frontline of the issue.

The UN agencies also expressed concern about what they described as the continued absence of dedicated EU-led search and rescue capacity in the Central Mediterranean.

“With relatively fewer NGO vessels compared to previous years, the gap is being increasingly filled by commercial vessels,” they said.

“It is vital that they are permitted to disembark rescued passengers promptly, as without such timely processes, shipmasters of commercial vessels may be deterred from attending to distress calls for fear of being stranded at sea for weeks on end.”