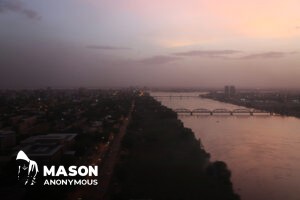 The flooding was triggered by heavy seasonal rains, mainly in neighbouring Ethiopia, which caused the Nile River to rise to nearly 17.5 metres (roughly 57 feet) this past weekend: the highest level in 100 years, according to the authorities.

OCHA spokesperson Jens Laerke said the government has declared a state of emergency in Khartoum state alone, where more than 21,000 people have been affected by flooding since the end of July.

Across Sudan, some 37,000 homes were destroyed in the floods, forcing families to seek shelter with relatives and host communities. Another 39,000 houses have been damaged, along with 34 schools and nearly 2,700 health facilities.

“Access to clean water – critical in the middle of the COVID-19 pandemic – has also been affected”, said Mr. Laerke, speaking from Geneva. “Some 2,000 water sources are contaminated or non-functional, according to initial assessments.”

Spokesperson Shabia Mantoo said rains have been particularly heavy in North Darfur state, leaving an estimated 35,000 IDPs, locals and refugees in need of help, where 15 people have died and a further 23 have gone missing.

“In Khartoum’s ‘Open Areas’ on the outskirts of the city, many South Sudanese refugees were living in make-shift homes and are in dire need of shelter,” she said.

“UNHCR is deeply saddened at the death of an 18-month old refugee girl who drowned in a collapsed latrine.”

The UN and humanitarian partners are supporting national response with emergency shelter and household supplies, together with water, sanitation and hygiene assistance, food, health services and vector control.

Mr. Laerke reported that they were able to respond quickly as supplies to meet the needs of 250,000 people had been pre-positioned before the rains started.

However, with stocks “being depleted rapidly”, OCHA is calling for wider support from the international community as a $1.6 billion humanitarian plan for Sudan is less than 44 per cent funded.