Reports from countries in every region suggest that restrictions in movement, social isolation, coupled with increased social and economic pressures are leading to an increase in violence in the home.

UN News spoke to the UN Deputy Secretary-General, Amina Mohammed about the issue, what is being done, and what governments, the UN, and others can do to prevent and address this abuse.

How serious is violence against women and girls right now?

Before this pandemic broke out, statistics showed that one in three women will experience violence in their lives. In Papua New Guinea, where I commemorated International Women’s Day last month, the rate is even higher, at two in three.

My concern today is for all women across the world who are suffering even more now due to the extra economic and social stresses caused by a radical shift away from normal life. This stress is leading to an increased danger of violence. It’s clear that when women and girls are ‘locked down’ in their homes with abusive partners, they are at much greater risk than ever before.

This upsurge in violence is not limited to one country or one region. Media reports are documenting an increase in violence across the globe – from Argentina, to China, Germany, Turkey, Honduras, South Africa the United Kingdom and the United States to name just a few. In Malaysia calls have doubled and in France they are up 32 per cent.  In Lebanon calls to the helpline were double in March of this year as they were in the same month last year.

When women and girls are ‘locked down’ in their homes with abusive partners, they are at much greater risk than ever before. Amina Mohammed, UN Deputy Secretary-General

And the worry is that these figures only reflect reporting. Domestic violence is typically grossly under-reported. In the case of restricted movement and limited privacy, women are finding it difficult to phone for help. So, the likelihood is that even these figures represent only a fraction of the problem. They are also reflective of countries that have reporting systems in place. The availability of data is not the same everywhere, particularly in developing countries.

How complex is the situation?

We are seeing not just a huge increase in the number of women and girls being abused but also a greater complexity to the violence being perpetrated. Women who are suspected, however erroneously, of exposure to the coronavirus, are faced with being thrown out onto the street in the midst of lockdown. Abusers are taking advantage of isolation measures knowing that women are unable to call for help or escape.

All of this is happening against a backdrop of health and social services that are overwhelmed, under-resourced, and have shifted to manage the implications of the virus.

Civil society organizations which may have previously helped victims of violence are unable to operate. And the domestic violence shelters that have been able to remain open are often full; shelter managers are not equipped and scared to take in new victims because of the virus.

What is being done?

All actors have a responsibility to act, from individuals to governments, from the UN to business and civil society. Addressing gender-based violence must be at the center of all domestic plans on COVID-19 response.

There are innovative actions being taken that should be both commended and replicated. In Argentina, for example, pharmacies have been declared safe spaces for victims of abuse to report. Similarly, in France, where grocery stores are housing pop-up-services and 20,000 hotel room nights have been made available to those women who cannot go home.

The Spanish government has told women that they are exempt from the lockdown if they need to leave the home because of abuse and both Canada and Australia have integrated funding for violence against women as part of their national plans to counter the damaging fall-out from COVID-19.

What other actions should be taken? 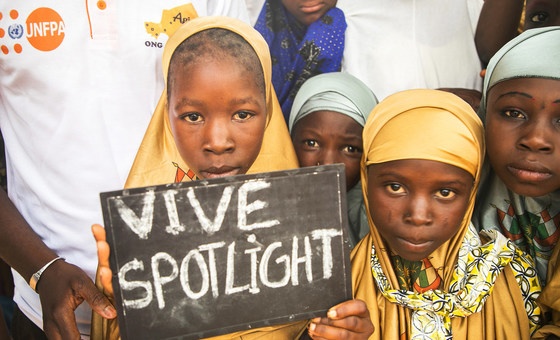 Young girls in the village of Danja in Niger hold a sign in support of the Spotlight Initiative a European Union and UN fund supporting the Sustainable Development Goals., by UNICEF Niger/Islamane Abdou

National governments in all countries should dedicate funding in national COVID-19 response plans for domestic violence shelters, increased support to call-in lines, including text services so reports of abuse can take place discreetly, online legal support and psychosocial services for women and girls. These are services which are run, in many cases, by civil society organizations, which now also need financial support. Shelters should be designated as essential services and kept open, which may mean providing childcare to staff so they can work. It’s crucial that these services are accessible, so they should be integrated into other essential service spaces, like grocery stores and pharmacies.

What is the United Nations doing?

Where the UN is providing humanitarian support, which includes some of the poorest and most unstable parts of the world, it is prioritizing protection services for women. It is advocating with governments for the measures mentioned above to be integrated into all national response plans. Lastly, the UN is building on the Spotlight Initiative, a large-scale partnership with the European Union to eliminate all forms of violence against women and girls.

Through the Spotlight Initiative, UN Country Teams, hand in hand with relevant partners, are shifting programming to the current context: moving services and campaigns online, scaling up support to civil society organizations on the front line of response, ensuring that domestic violence shelters can stay open, and developing online and text based peer support and chat programmes. The Initiative is also aiming to increase core support to women’s organizations providing services and who are at risk with the shift in funding priorities.

In this unprecedented and unpredictable global crisis, the United Nations remains committed to protecting and supporting women, wherever they are in the world.