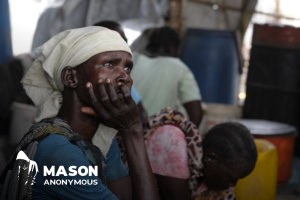 By Friday, UNMISS Bangladeshi peacekeepers in Wau, a city located in the country’s north-west, had treated more than 100 civil servants suffering from a variety of health issues.

“My problem is my kidney because it hurts too much,’’ said 21-year-old Sodinia Edward, who went to a hospital in Juba where she was told that “they did not have medicines”.

We have been engaged in humanitarian assistance, especially the medical and veterinary services – UNMISS commander

However, she left the UNMISS clinic with the prescribed drugs in her possession, just like many of the other patients suffering from high blood pressure, diabetes and other ailments.

The commander of the Bangladeshi peacekeepers detailed that their work in Wau is not limited to providing force protection to UN facilities and aid convoys.

“Since our arrival, we have been engaged in humanitarian assistance, especially the medical and veterinary services but also some other social programmes,’’ said Colonel Majhuri Heque.

Since the onset of the crisis in 2016, most of the city’s health facilities have faced shortages of medication, leaving their clinics brimming with patients.

The local agriculture minister, who lives with diabetes and blood pressure issues said that the government would like UNMISS to extend their medical services to villages in the area.

“We have little chance of being able to afford the medicines needed,” Simon Akot explained, adding that many villagers resort to leaves and roots that may, or may not, have medicinal properties.

A new chapter of ‘forgiveness’

UNMISS outreach does not exclusively focused on health, as illustrated by its recently concluded forum aimed at promoting harmonious relations between political actors, embracing SDG 16’s focus on participatory democracy and governance.

As politicians in Aweil East, also located in the north-west, pondered how best to achieve durable peace, the UNMISS’ Civil Affairs Division organized a two-day reconciliatory meeting in Wanyjok town, where 50 participants from four different political parties commitment to reconcile and work together in accordance with the revitalized peace agreement.

Politicians in Aweil East #SouthSudan participating in a rapprochement forum organized by #UNMISS say they are ready to make “sacrifices” to achieve “paramount” peace. Find out exactly how far some would go to make this happen: https://t.co/GgujokEY7s pic.twitter.com/Y2tA8ggsiz

“For us to open a new chapter, forgiveness is needed,” said Abuor Gordon, a representative of the Sudan People’s Liberation Movement.
From the Sudan African National Union Party, Achoul Garang Deng thought the forum was fruitful because it taught how to resolve political differences peacefully.

“We should have one view, whether we are ordinary citizens, military or politicians, for the sake of peace,” she said.

All agreed that peace is paramount for the security and development of the nation.

“It is a forum for all the political actors, including the political parties here, to reflect on the peace agreement itself,” said Khalif Farah, who serves with UNMISS.

For his part, the deputy governor of Aweil East, William Ater Lual, welcomed a six-month extension of the pre-transitional period, calling it “an opportunity for the country’s leaders to get the peace process back on track”.

Forum participants all held firm that durable peace would lead to fair distribution of resources, a restored social fabric and the professionalization of the army.

Getting the judicial process on track

Meanwhile on Friday in the Jonglei state, UNMISS’ Human Rights Division held a one-day judicial training workshop in Bor to strengthen traditional courts’ members and to facilitate a discussion between formal and traditional justice systems.

Discussions focused on the existing competencies and jurisdiction of each body, and the necessary cooperation needed for the town’s judiciary to function well.

“Training in judicial processes is critical to ensure fairness and professionalism in what we do”, said Daniel Deng, the Bor High Court Magistrate. “We don’t have such opportunities often”.

UNMISS Human Rights Officer in Bor Alfred Zulu said that they identified many challenges in dispensing justice caused by existing conflicts between customary and formal law, lack of knowledge of some legal aspects and the overlapping of competencies within the judicial system.

“The workshop was designed to bring all partners involved in the process, from detention to investigation, trial, defense and custody, to facilitate an enriching dialogue that would result in better cooperation, and clarify areas of concern,” explained Mr. Zulu.