Will a push to getting to zero emissions impact trade & thus the #maritime industry? Our deputy Secretary-General @Isabelle_Durant told the Global Maritime Forum summit today that while 80% of global goods trade uses maritime transport, something needs to be done. #GettingToZero pic.twitter.com/EE66J3LmG9

If emissions from the maritime industry are not cut, we are headed for “an environmental disaster”, Isabelle Durant, the deputy head of the UN trade body, UNCTAD, told the Global Maritime Forum summit on Wednesday.

Her views were echoed by the UN shipping agency IMO, whose spokesperson, Lee Adamson, told UN News in an exclusive interview that current levels of emissions from shipping are “not acceptable”, and the industry needs a “new propulsion revolution”, to completely cut emissions from the sector.

For hundreds of years, shipping has been one of the most important methods of connecting the world, and, even today, it is crucial to international commerce, and linking nations and communities. It key role is only likely to grow, along with a major increase in global trade and maritime transport.

According to the IMO, shipping will be essential to the UN’s vision for sustainable development, providing a dependable, energy-efficient and low-cost way to transport more than 80 per cent of the world’s trade.

Nevertheless, the greenhouse gas emissions produced by the sector are significant and, according to the World Bank, the sector has not kept pace with other forms of transport, when it comes to climate action. The World Bank estimates that a single large shipping vessel, produces as much sulphur as 50 million cars.

At around 800 million tonnes per year, the industry as a whole is responsible for approximately 2.2 per cent of all global emissions.

Speaking at a plenary panel on the importance of drastically reducing maritime emissions, Ms. Durant said that the maritime industry is heavily reliant on a form of liquid fuel (so-called “bunker fuel”) that has a high carbon footprint. Global seaborne trade is expected to double over the next twenty years, which means that it is imperative to make sure ships are powered in a way that is much more sustainable.

This is why the UN is leading a number of projects aimed at significantly cutting emissions and, eventually, phasing them out altogether. 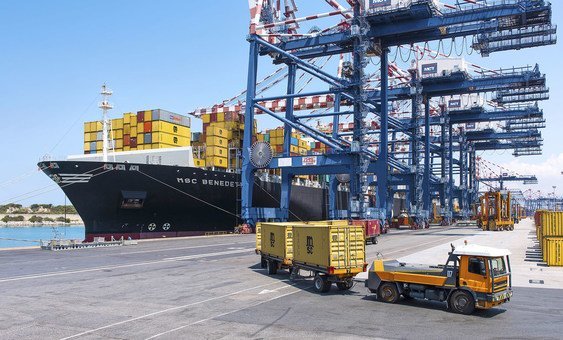 At the Global Maritime Forum’s Annual Summit, taking place in Singapore, Ms. Durant and colleagues launched UNCTAD’s 2019 Review of Maritime Transport, which confirmed the necessity of a drive towards environmental sustainability, and noted that technological disruption and climate change have had a major impact on the shipping over the last decade.

Some companies are calling for financing to be unlocked to develop zero-emission vessels.

Mr. Adamson explained to UN News how the IMO is helping to make this a reality: “In 2018, IMO Member States adopted an initial strategy for cutting GHG emissions from shipping and phasing them out entirely, as soon as possible. There’s a specific linkage to the Paris Agreement on climate change, and clear levels of ambition – including at least a 50 per cent cut in emissions from the sector by 2050, compared to 2008.”

Mr. Adamson added that, given the expected rise in trade and transport, ships currently at sea will have to cut their emissions by some 80 per cent and, by 2030, newly-built ships will need to be completely emission-free: “the strategy is expected to drive a new propulsion revolution. There is a need to make zero-carbon ships commercially more attractive, and to direct investments towards innovative sustainable technologies, and alternative low-carbon and zero-carbon fuels”.

The status quo is not acceptable because of the impact of ship emissions, and that has its own cost which is also borne by society – Lee Adamson, Spokesperson, International Maritime Organization

Plugging in to a battery-powered future

A number of exciting options are currently being explored by the industry which, says Mr. Adamson, has been given a clear signal of the way forward, thanks to the IMO emissions strategy. These include battery-powered and hybrid ferries, ships trialling biofuels or hydrogen fuel cells, and wind-assisted propulsion.

The battery pack on the boat gives it up to 60 minutes manoeuvring and sailing at speeds of up to 12 knots, which means that the last leg of the two-and-a-half-hour trip, through the fjord that leads to Sandefjord harbour, is emission-free.

Norway is also the home of Brødrene Aa, which builds highly efficient carbon fibre ferries, which, they say, can reduce fuel consumption by up to 40 per cent compared to traditional vessels. The company has developed a concept vessel that runs entirely on batteries and hydrogen, anticipating a future in which zero emissions ferries are the norm.

Despite these encouraging signs that a zero-emission future for shipping is possible, action needs to take much faster, warns Mr. Adamson, if the UN’s goals are to be achieved.

To speed up progress, the IMO is engaged in several major global projects, involving Member States and the shipping industry (see text box below).

Although investments in low or zero-emission shipping may mean higher costs, business as usual, says the IMO spokesperson, is not an option: “the status quo is not acceptable because of the impact of ship emissions, not just to address climate change, but also on human health and the environment, and that has its own cost which is also borne by society”.

“The principle of ‘polluter pays’ is well established, and it has to be recognized that shipping is a polluter, in spite of its cost-effectiveness, and somehow that needs to be mitigated”