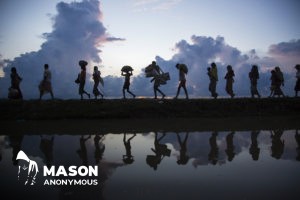 The report by former Guatemalan Foreign Affairs Minister, Gert Rosenthal, a former UN Ambassador and top executive at the UN’s Economic Commission for Latin America and the Caribbean (ECLAC), said that the UN System overall had been “relatively impotent to effectively work with the authorities of Myanmar, to reverse the negative trends in the areas of human rights, and consolidate the positive trends in other areas.”

The review, published on Monday, covers the period 2010-2018, encompassing the UN’s response to the systematic and brutal abuse of hundreds-of-thousands of mainly-Muslim Rohingya in Rakhine state, by the national army and security forces, which began in August 2017, described by the UN human rights chief at the time as a text book example of ethnic cleansing.

I wish to reiterate @UN's commitment to implementing durable solutions for the IDPs in central #Rakhine in cooperation with the Government of #Myanmar and in accordance with international principles.#peace #development #humanrights

In his conclusions and recommendations, Mr. Rosenthal writes that responsibility for the grave abuses wrests mainly with the Government. But although the UN’s systematic failures are not down to any single entity or any individuals, “clearly there is a shared responsibility on the part of all parties involved in not having been able to accompany the Government’s political process with constructive actions, while at the same time conveying more forcefully the United Nations’ principled concerns regarding grave human rights violations”.

He also notes the UN Security Council should bear some responsibility, “by not providing enough support to the Secretariat, when such backing was and continues to be essential”.

Mr. Rosenthal said that the key lesson, was “to foster an environment encouraging different entities of the UN System to work together” to reinforce a “broader, system-wide strategy”.

The UN Spokespersons’ Office, reacting to the report, said that UN chief António Guterres was “grateful to Mr. Rosenthal for producing a candid, forthright and useful report. The entire report, including its conclusions and recommendations, has been transmitted to the Member States”.

Mr. Guterres said he was accepting the recommendations “and is committed to implementing them so as to improve the performance of the United Nations system. This review is valuable for the Resident Coordinator and the UN Country Team in Myanmar, as well as in other countries where the UN operates in similarly challenging conditions.”

The UN chief noted that no individual or agency was being singled out, and said it was useful for analyzing how the UN can work more effectively, “on the ground and possible lessons learned for the future.”

“The Secretary-General notes the report’s assessments are in line with the Secretary-General’s own efforts to put a greater emphasis on prevention, and also to improve the performance and accountability” of the UN at a country level, “by creating a new generation of UN country teams and more adapted structures at the headquarters level”, said the Office of the Spokesperson.

Mr. Guterres indicated he would be following up to ensure that the recommendations are implemented.