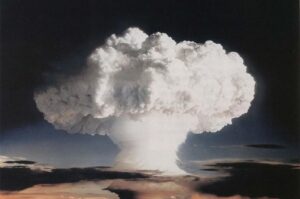 His request came in remarks to the latest conference to promote the treaty’s entry into force, which were delivered by UN High Representative for Disarmament Affairs, Izumi Nakamitsu.

Countries meet today at the #ArticleXIV Conference, on the eve of the 25th anniversary of the #CTBT’s opening for signature, to rally high-level global support for its entry into force. Let’s #FinishWhatWeStarted and ban all #nucleartests, by anyone, anywhere, for ever. #CTBT25 pic.twitter.com/EH5SP0dtUs

The CTBT was adopted in 1996 and has been signed by 185 countries, and ratified by 170 of them, including three nuclear weapons-holding States: France, Russia and the United Kingdom.

However, for the Treaty to enter into force, it must be signed and ratified by 44 specific nuclear technology holder countries, eight of which have yet to ratify the Treaty: China, Egypt, India, Iran, Israel, the Democratic People’s Republic of Korea, Pakistan and the United States.

The last Annex 2 State to ratify the Treaty was Indonesia on 6 February 2012.

The Secretary-General stated that a prohibition on nuclear testing is an essential element of a nuclear weapons-free world.

The CTBT “has created an almost universally adopted norm against the testing of nuclear weapons,” he added.

The UN chief applauded the Preparatory Commission, the office working to achieve the treaty’s entry into force, for its tireless efforts in establishing a proven, robust and global verification system that can conduct real-time monitoring of nuclear tests anywhere in the world.

“Given its necessity and readiness, it is both disappointing and frustrating that the Treaty has not yet entered into force. We all know the reason for this – the eight remaining Annex II States whose ratifications are required for the Treaty’s entry-into-force,” he said.

“As a result, a critical element of our collective security cannot be fully operationalized. I repeat my call to these States to sign and ratify the CTBT as soon as possible. I also call on all other States that have not yet signed or ratified the treaty to do so without delay.”

The Secretary-General expressed hope that the day will come when the Article XIV Conference will no longer need to be convened. It has been held every other year since 1999.

“We have remained in this state of limbo for too long,” he said.

“No norm or moratorium can replace a legally binding prohibition. States must take this occasion to redouble their efforts. To think creatively. And to act in the interest of the entire world’s security.”