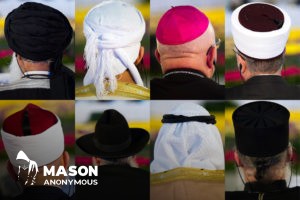 “It lays bare our responsibility to promote solidarity as the foundation of our response – a solidarity based on the human rights and human dignity of all”, Secretary-General António Guterres explained. “And it highlights the crucial role of religious leaders in your communities and beyond”.

Joined by leaders from the Jewish, Christian and Muslim faiths, the UN chief cited previous public health crises, including HIV/AIDS and Ebola, noting how spiritual leadership had been a positive benefit in terms of community values, attitudes and actions.

“And with this influence comes responsibility to work together, putting aside differences, and to translate our common values into action”, he underscored as he highlighted four pivotal ways they can help reverse the pandemic, and aid recovery.

First, he asked them to “actively challenge inaccurate and harmful messages” along with rejecting xenophobia, racism and “all forms of intolerance”.

It was important to “categorically condemn” violence against women and girls, which is on the rise, he said, and “support shared principles of partnership, equality, respect and compassion”.

He called on leaders to leverage their networks to support governments in promoting public health measures, such as physical distancing and good hygiene and to also practice these during faith-based activities, including worship services and burials.

Finally, as the world’s students are out of school, he urged faith leaders to “support the continuity of education” so that learning never stops.

Providing ‘hope to the hopeless’

General Assembly President Tijjani Muhammad-Bande highlighted the unique role of faith, saying that it gives “hope to the hopeless” and in times of anxiety, “can be a significant source of comfort and community resilience.”

During this “unprecedented threat”, he said that religious leaders and faith-based organizations have an even greater role to play “in saving lives and mitigating the spread of the disease”.

“We look up to them to share credible information and stand up against rumours, violence, and the incitement of hate and advocate for the needs of vulnerable populations”, stressed the Assembly President.

Against the backdrop of rising poverty, heightened suffering for marginalized people, children out of school and fatalities from the coronavirus, Mr. Muhammad-Bande flagged that “unfortunately, there is no timeline for the end of this pandemic”.

“This means that we have a lot of work ahead of us”, he said calling on “faith-based organizations and religious leaders, equipped with courage and vision”, to use their moral authority to continue advocating for women’s empowerment, access to education and health facilities.

As COVID-19 related restrictions have closed churches, synagogues and mosques worldwide, he noted that many religious leaders have swiftly adapted by taking worship online. He also lauded their engagement with youth in developing messages on social media, “making them effective partners” in raising awareness on preventative measures.

"Since the outbreak of the #COVID19 pandemic, local faith institutions, religious leaders & faith-based orgs have been responding to the needs of their communities as humanitarian actors as well as leveraging their moral authority to share positive messaging." – @MiguelMoratinos pic.twitter.com/76T5r4xufi

Religious leaders on the frontlines

High-Representative for the UN Alliance of Civilizations (UNAOC) Miguel Moratinos shared the Secretary-General’s call for global solidarity, underscoring the need to consider vulnerable populations and marginalized communities, as well as growing stigma and hate speech.

“In life-altering crises when people are desperate and uprooted from their lives, faith has often been their anchor and the place they turn to for consolation and hope”, he maintained, adding that “this is where the role of religious leaders come into play”.

The UNAOC chief elaborated that faith actors are deeply rooted in the communities they serve and are often first responders, saying it “was heartening to see how many religious leaders and communities of faith swiftly acted and placed themselves in the frontlines providing valuable services to their communities”.

He also acknowledged Governments and health institutions for working closely with religious leaders as millions globally had to celebrate Passover, Easter and Ramadan under lockdown to reduce coronavirus transmission.

In closing, Mr. Moratinos announced a meeting at the end of the month to, among other things “identify areas of action and concrete result-oriented initiatives that religious leaders and faith-actors can undertake in response to COVID19”.

Cardinal Miguel Ángel Ayuso Guixot, of the Catholic Church, told the gathering that the pandemic “provides the impetus for us to build bridges of friendship and fraternity”.

“Let us stay united to face current challenges”, he said.

Rabbi Arthur Schneier of the Park East Synagogue in New York, and Ambassador to the UNAOC, looked beyond the pandemic, reminding all that “every crisis and conflict comes to an end”.

As a Holocaust survivor, he recalled that the UN was established 75 years ago as “a classic example” of mankind’s history of destruction, devastation, loss of life, rebuilding, restoration and as a result of united action, “ultimately rebirth”.

“With faith, prayer and action we can build a brighter future for our children, a world of peace, love and kindness”, he stressed.
Ahmed Abbadi, Secretary General of Morocco’s Rabita Mohammadia of Oulémas spoke on behalf of the Islamic faith.

The organizer of the event, Moroccan Ambassador to the UN Omar Hilale, noted that “the fury with which COVID-19 fell on the world and its planetary consequences, require, more than ever, a unified and responsible message.”