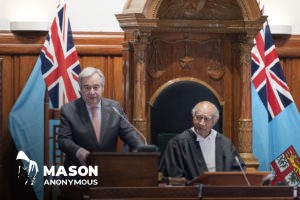 “Fiji has taken on the sceptics and the deniers” in a loud and clear voice, he said, “and the world is listening”.

The Secretary-General outlined that Fiji was the first small island State to preside over the UN Framework Convention on Climate Change (UNFCCC) and in 2017, became the first emerging market to issue a sovereign “green bond”, dedicated to environmental conservation. It introduced an Environment and Climate Adaptation Levy; launched a rural electrification programme to reduce diesel emissions; and has relocated villages and established guidelines on how to support people displaced due to climate change.

.@UN chief @AntonioGuterres continues his journey in the Pacific islands to fight the "battle of his life" for #ClimateAction.

His second day in Fiji: pic.twitter.com/M6VcfG1HGJ

“Other countries in the region can learn from your example”, he congratulated.

Mr. Guterres pointed to the Fijian legislature as another of the country’s important achievements calling it “a place of inclusiveness, equality, diversity and tolerance”.

“We need that spirit more than ever at this time”, he said, noting rising anti-Semitism, anti-Muslim rhetoric, the persecution of Christians and other forms of xenophobia and racism.

The UN chief stressed the importance of showing solidarity in response to a “dangerous upsurge in hatred” and to combat the hate speech “coarsening our public dialogue in many countries and regions of the world”.

Citing the 2030 Agenda and the Sustainable Development Goals (SDGs) as “our blueprint for a fair globalization built on prosperous, peaceful and resilient societies on a healthy planet”, he commended Fiji for being the first parliament in the world to undertake an SDG self-assessment.

Noting that climate change is “the defining issue of our time”, Mr. Guterres acknowledged how Fijians have suffered cyclones, floods and droughts, or lost their homes, schools or crops to rising seas, saying “the United Nations stands with you, I stand with you”.

He flagged the importance of financing, underscoring that given the amount of climate change that has already occurred, investment in adaptation “is especially crucial” in the Pacific region.

“We need developed countries to fulfill the pledges they have made
to support action in developing countries – including by mobilizing the public and private sector to reach $100 billion per year to support mitigation and adaptation”, the UN chief said, adding that the “successful replenishment of the Green Climate Fund” is also vital.

To help generate ambition, Mr. Guterres announced that he is convening a Climate Action Summit in September.

“My message to leaders is very clear: Don’t come with a speech; come with a plan”, he asserted. “I want leaders to showcase their plans to enhance Nationally Determined Contributions by 2020, and to cut emissions radically by 2025” by ending subsidies for fossil fuels and unsustainable agriculture and shifting towards renewable energy, electric vehicles and climate-smart practices.

Carbon pricing must reflect the true cost of emissions, the UN chief said, “from climate risk to the health hazards of air pollution”. That means not constructing any coal plants beyond 2020 and replacing jobs in fossil fuel industries with “cleaner, healthier alternatives, so the transformation is inclusive, profitable and just”.

Noting “rampant” overfishing and plastic pollution that is “poisoning and depleting” the oceans, he emphasized that “the world must do more”.

“The coming years will be a vital period to save the planet and to achieve sustainable, inclusive human development,” he said. “The alarm bells keep ringing”.

“We must address this global emergency with ambition and urgency”, the Secretary-General concluded, adding “every country has a role to play”.