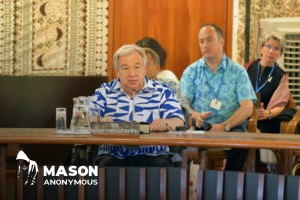 “The Pacific region is on the frontline of climate change”, he said. “That means you are also our important allies in the fight against it”.

The UN chief said that he was there “to see the region’s climate pressures firsthand, and to learn about the work being undertaken by communities here in Fiji and elsewhere to bolster resilience”.

Noting that the last four years were the hottest on record, Mr. Guterres highlighted recent ice losses in Greenland and Antarctica, saying that “sea levels will rise a full meter by 2100”. 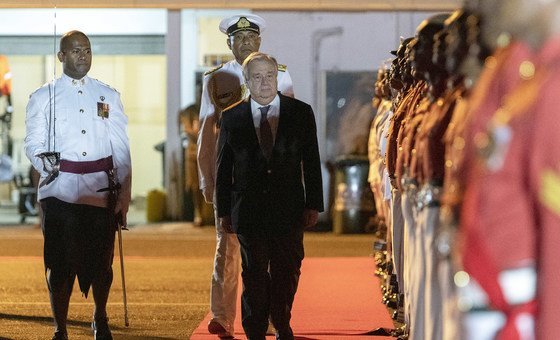 The UN Secretary-General António Guterres arrives in Suva, Fiji, on 14 May 2019., by UN Photo/Mark Garten

In the Pacific specifically, he said that sea-levels are set to rise in some countries four times above the global average, posing “an existential threat to some island States”.

Providing “ample evidence of the region’s vulnerability” the UN chief cited recent damage caused by Tropical Cyclones Gita, Josie and Keni as well as by volcanic eruptions and earthquakes and other extreme weather events in the region.

“Climate change will further worsen the risks”, he spelled out, noting that the salinization of water and crops is endangering food security and escalating the impact on public health.

He maintained that climate change also brings “clear dangers” for international peace and security, pointing to the 2018 Boe Declaration, which reaffirms climate change as the single greatest threat to the wellbeing of the Pacific.

Mr. Guterres said that he recently appointed a task force to coordinate UN initiatives to address these challenges.

The Pacific region is on the frontlines of climate change but is also a frontrunner in taking urgent and ambitious #ClimateAction. My remarks at the Pacific Island Forum: https://t.co/udRPd8NWoG pic.twitter.com/8CQouhVsHD

Recalling that more than 24 million people in 118 countries and territories were displaced by natural disasters in 2016, he told Pacific leaders their islands and communities “are in the forefront of global climate negotiations”.

He vowed the UN’s strong commitment “to supporting your response to climate change and reversing the negative trends that have put your cultures and very existence at risk”.

Climate change also threatens the well-being of the world’s ocean and seas, which are critical to the economies and traditions of the Pacific.

“Oceans are warming and becoming more acidic, causing coral bleaching and reducing biodiversity” the UN chief told the Forum, stating that global warming of 1.5 degrees Celsius would cause “severe damage to tropical reefs”.

Moreover, if warming reached two degrees Celsius or more, “it would be catastrophic for marine life and humans alike” he said. “Food security would decline. Economic growth would suffer”.

But seas and marine life are also under attack from other directions. Mr. Guterres painted a picture of overfishing; underwater deserts in effect, with no oxygen; seas filled with poison and trash, and species becoming extinct within decades.

“Every year, more than eight million tonnes of harmful plastic waste end up in the ocean” he said. “According to one recent study, plastic could outweigh fish in our seas by 2050”.

While many countries are finally rejecting single-use plastic, the UN chief underscored that “we must do even more” to address the unsustainable levels of stress on marine and coastal ecosystems.

He commended Pacific countries for ensuring the adoption of Sustainable Development Goal (SDG) 14 to conserve and sustainably use the oceans, seas and marine resources for sustainable development, saying that his Special Envoy for the Ocean, Fiji’s Peter Thomson, is promoting the SDGs and the outcomes of the UN Ocean Conference.

Needed: ‘Urgency, will and ambition’ 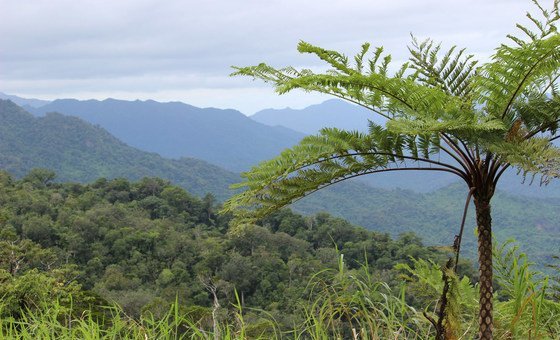 A community forest conservation area in Dalaikoro, Fiji. Forest cover is vital to maintain the ecosystem in the region, which is in turn critical for communities in the Pacific island nation., by FAO/Rudolf Hahn

“To address the intertwined challenges of climate change and ocean health, we need smart and far-reaching steps” that require action aligned with the Paris Agreement and the 2030 Agenda, which makes full use of tools, such as the Convention on the Law of the Sea, according to the UN chief.

“We have the blueprints, frameworks and plans” he stated. “What we need is urgency, will and ambition”.

Mr. Guterres spoke of his Climate Action Summit in September at UN Headquarters, as an opportunity “to scale up” pledges to halt emission increases 2020, and “dramatically reduce” them to net-zero emissions by mid-century.

He also stressed the importance of gender diversity in decision making as climate change has impacts on women, citing as an example that food salinization affects the health of pregnant women and newborns.

Come September, Mr. Guterres said that sustainable development will be centre-stage as SDG progress will be reviewed and finance mobilization discussed.

He lauded Pacific countries’ commitment to promote their vision of a “Blue Continent” and maintained that their voices “remain crucial in global negotiations”.

“The Pacific has a unique moral authority to speak out” he said. “It is time for the world to listen”.