The Secretary-General began by reminding delegates that, currently, not enough financing is being mobilized to achieve the Sustainable Development Goals (SDGs), and that rising levels of debt are limiting spending. On a more positive note, he continued, financial markets are increasingly integrating sustainability into their operations, and banking institutions have committed to a more sustainable way of doing business.

Financing, concluded the UN chief, can help the world get back on track for the “decade of action” leading up to the 2030 deadline: “Let us all raise ambition for development finance, climate finance, and finance that will enable markets to grow, businesses to thrive and people to live in dignity”.

“It is time to transcend words to action, the only way to transform our world”, Tijjani Muhammad-Bande, President of the General Assembly, declared. The High-Level Dialogue provides an opportunity to evaluate the progress of the Sustainable Development Goals, he said, noting that a funding gap of some $2.5 trillion had been identified at the SDG Summit, held on Tuesday and Wednesday, as one of the biggest impediments to achieving the Goals.

Mr. Muhammad-Bande called on leaders to remain steadfast in their commitments, generate resources that can match ambitions, honour aid commitments, and increase private investments to generate further growth and provide decent jobs: “A sustainable development future requires investing in the present. We have a clearly stated roadmap and due date. Let us act now and work together to take bold action to deliver for all”.

Achieving development and self-reliance in Africa

Nana Addo Dankwa Akufo-Addo, President of Ghana, and Sola David-Borha, CEO of Africa Regions Standard Bank Group, both delivered keynote speeches with a focus on shifting from aid to self-reliance and development.

“We have to harness effectively our own resources”, said Mr. Akufo-Addo, “and deploy them creatively and efficiently, to finance the rapid economic and social transformation that we seek. We need a lot of resources, to generate the prosperity we want in Africa”.

Ms. David-Borha told the meeting that banks, such as Standard Bank, which have signed the principles for responsible banking, have committed to aligning their business strategies to the SDGs.

Governments alone, she said, cannot fund the SDGs, and the financing that Africa has so far received is just “a drop in the ocean”, which is why the public and private sectors must work together: “the engagement and dialogue between both sides must step up considerably, so that trust and mutual respect can be built”. 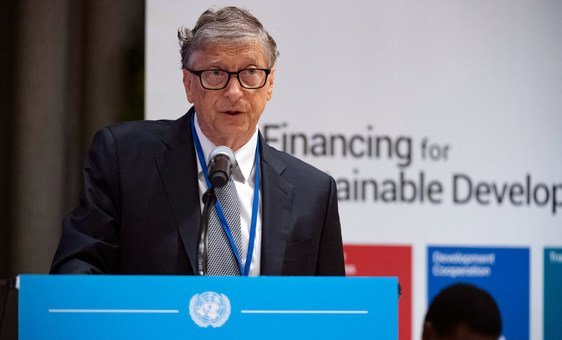 Bill Gates, principal founder of Microsoft, and co-chair of the Bill and Melinda Gates Foundation, told delegates that no single solution exists to getting the Sustainable Development Goals back on track, but recommended a focus on targeting specific needs, geographies and groups of people.

Mr. Gates added that one third of the finance needed for sustainable development could come from new tax revenues, accompanied by more efficient spending and foreign aid, but he counselled countries to make their tax policies progressive, to ensure faith in financial systems, and provide essential health and education services.

Sustainable future ‘essential for life as we know it’: Prince Charles

“The transition to a sustainable future is essential for the ultimate viability of life as we know it”, said Charles, Prince of Wales (and first in line to the British throne), in a video message played to delegates.

Prince Charles said that he could “only pray” leaders will embrace the “utmost urgency” of what is required, and that they will commit themselves, and inspire others, to practical action in order to finance the SDGs and climate action.

Vast number of young people around the world, he continued are “fed up”, in the face of an unprecedented global emergency.