In the statement issued by his Spokesperson, Secretary-General António Guterres urged all partners to “urgently ensure sustainable and predictable funding” for the recently established African Union Transition Mission in Somalia (ATMIS), and help fund Somali security forces in support of the country’s security transition.

The statement added that the UN chief “looks forward to working closely with the African Union, Federal Government of Somalia and all partners to support a phased handover of security responsibilities to Somali security forces.” 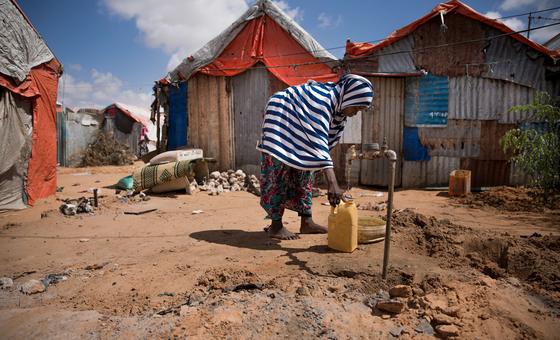 Additionally, the Secretary-General paid tribute to the “significant achievements” of the African Union Mission in Somalia (AMISOM) over the past 15 years, which the new mission replaces, in line with a decision by the AU’s Peace and Security Council.

He also expressed his gratitude to the AMISOM troop and police contributing countries for their commitment to advancing peace in Somalia.

Mr. Guterres honoured all those troops who served and “paid the ultimate sacrifice” in defence of peace and security in Somalia.

Following a six-day visit to the country, the UN independent expert on the situation of human rights in Somalia, Isha Dyfan, on Tuesday urged the Government to improve healthcare services, according to a press release issued by UN human rights office, OHCHR.

While acknowledging steps taken by the authorities and humanitarian partners to implement an Emergency Response and Preparedness Plan and provide food, water and other essential items to displaced populations in Baidoa and elsewhere, she told journalists in Mogadishu on Saturday that “access to health care remains dangerously low in the country.”

“There is only one Government hospital in the capital, Mogadishu, and people often have to seek healthcare services at a private health facility and pay out of their own pocket very high amounts for their own treatment,” said the UN expert.

Healthcare for all plea

Ms. Dyfan called on the international community to ensure drinking water, sanitation facilities, housing, healthcare and education for all children as well as other basic social services.

She also urged the Government to increase funding for its health system and, learning from the COVID-19 pandemic, to expand the delivery of public health services.

“Only a few people can afford these services, thereby leading to high child and maternal mortality,” said the UN expert.

The rights expert drew attention to forced and child marriages, calling on the authorities to end them.

Turning to the arbitrary arrest and detention of journalists by security personnel across the country, Ms. Dyfan expressed her concern and reiterated the importance of respecting the right to freedom of expression and opinion.

In addition to meeting with State officials, representatives of humanitarian organizations and civil society, the independent expert held discussions with the AMISOM, the UN Assistance Mission in Somalia (UNSOM) and UN agencies, funds and programmes.

Independent experts are appointed by the Geneva-based UN Human Rights Council to examine and report back on a specific human rights theme or a country situation. The positions are honorary and the experts are not paid for their work.