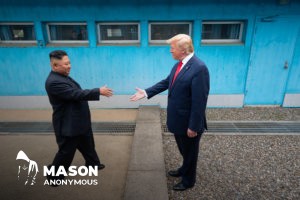 For the first time since their last summit in the Vietnamese capital, Hanoi, broke down in February, both countries agreed to resume stalled nuclear talks.

Before crossing over, US President Donald Trump and North Korean leader Kim Jong-un, posed for photographers in the heavily-fortified demilitarized zone.

“The Secretary-General fully supports the continued efforts of the parties to establish new relations towards sustainable peace, security and complete and verifiable denuclearization of the Korean Peninsula”, according to the statement.

Nuclear negotiations between the US and North Korea have proceeded in fits and starts for decades, with no sustaining success in halting the North’s atomic weapons programme.

In 2017, Pyongyang launched its sixth and largest nuclear test since it began its programme in 2006, straining further US-North Korean relations during President Trump’s first year in office.

The following year, Mr. Trump and Mr. Kim met in Singapore, signing a joint statement vowing to pursue peace and complete denuclearization of the Korean Peninsula, albeit with few details.

The two met again in February 2018, but disagreements over sanction and denuclearization collapse the summit early, yielding no agreement.