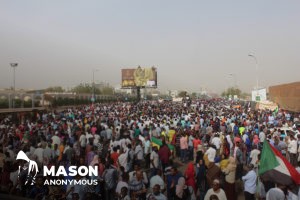 The two sides have reportedly agreed to share power for three years, and then hold elections for a return to full civilian government. Mr. Guterres welcomed the decision to establish transitional governing bodies, and congratulated the African Union, Ethiopia and the regional Inter-Governmental Authority on Development (IGAD), for their role in mediating the talks.

Sudan: The Secretary-General @antonioguterres is encouraged by the agreement reached between the Forces for Freedom and Change and the Transitional Military Council on 5 July towards the establishment of transitional governing bodies. https://t.co/o3nuhDXoDD

News of the deal reportedly brought thousands of people onto the streets to celebrate and raised hopes that a peaceful transition of power can take place, following months of turmoil since December’s civilian revolt began.

The Secretary-General, said a statement from his Spokesperson, is now encouraging all stakeholders to “ensure the timely, inclusive, and transparent implementation of the agreement and resolve any outstanding issues through dialogue.”

The statement also noted that Mr. Guterres welcomes the parties’ commitment to conducting an independent investigation into the violence perpetrated against peaceful protesters, including the events on 3 June, when security forces and militia fired on pro-democracy protesters in the capital Khartoum, leaving dozens dead and many more injured.

The UN chief expressed his solidarity with the people of Sudan, and reiterated the commitment of the United Nations to assist in the transition process.

Following a series of strikes and protests early in the year, long-time dictator Omar al-Bashir was overthrown by his top generals in April. Hopes were high that the military and opposition could reach a deal, but since the military-led violence of 3 April, talks were at an impasse until the latest round of negotiations began in the capital Khartoum earlier this week.

Just last Sunday, there were nationwide demonstrations demanding the transfer of power to civilian hands, in which at least seven were reportedly killed, with more than 180 injured.

On Wednesday, UN human rights chief Michelle Bachelet called on Sudanese authorities to lift restrictions on the internet and launch independent investigations into all acts of violence against demonstrators, and allegations of excessive force, including attacks on hospitals. Ms. Bachelet said her office had received numerous allegations that excessive force had been used by security forces against protestors.